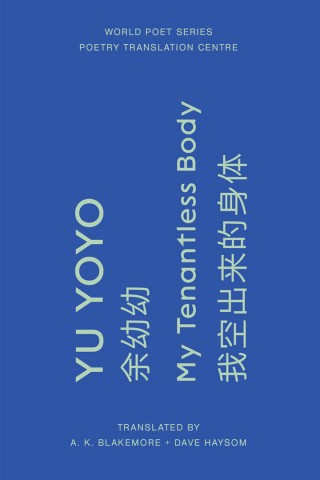 Translated by A K Blakemore and Dave Haysom

My Tenantless Body is the celebrated Sichuanese poet Yu Yoyo’s first publication in English. It presents a sensitive yet forceful new voice that leads us through the haunted nightscapes of China with dark wit. The book’s young protagonist veers in and out of focus: her thoughts always intensely clear, her feeling never simply clarified. In these poems the oblique and the plain-spoken seem to cross paths, picking one another’s pockets along the way.

The book is the second title published in our new World Poet Series which showcases the most exciting living poets from Africa, Asia and Latin America in beautiful pocket-sized bilingual editions. The poems have been sensitively translated into English by the poet A.K. Blakemore and bridge-translator Dave Haysom. Yu’s work is expertly introduced and set in context by Haysom and the poet Rebecca Tamás offers a sensitive and profound response to the poems in the afterword.