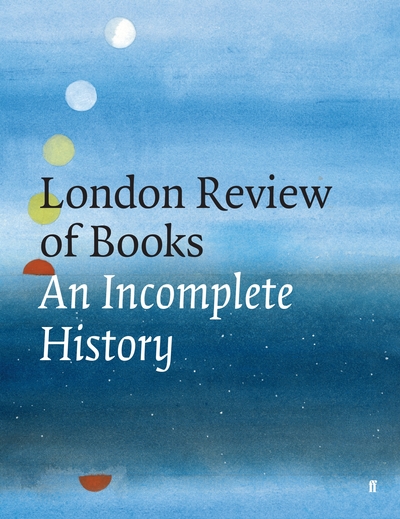 The London Review of Books

The most literary gift of the year: a beautiful hardback collection of archive gems from the London Review of Books, published to celebrate their 40th anniversary. Every two weeks for the past forty years, the London Review of Books has published between ten and twenty book reviews and essays interspersed with letters, poems and occasional short stories, growing from 'a small paper' - as the founding editor Karl Miller put it - into Europe's leading literary magazine. But behind this uncharacteristically celebratory tale are countless smaller, sharper stories. After all, it takes a lot of gossip, ingenuity, argument, obsessive attention to detail, persistence, parties, panic, hustle and continuous correspondence - with towering contributors and heroic subscribers alike - to make a reasonably interesting fortnightly paper. London Review of Books: An Incomplete History invites readers behind the scenes for the first time, reproducing a fascinating selection of artefacts and ephemera from the paper's archives, personal collections and forgotten filing cabinets. Letters, notebooks, drawings, postcards, fieldnotes and typescripts, many of them never previously published, bring an idiosyncratic slice of Bloomsbury's heritage to life. Fragments by legendary contributors - from Alan Bennett to Angela Carter, Oliver Sacks to Edward Said, Ted Hughes to Christopher Hitchens, Richard Rorty to Jenny Diski, plus the occasional prime minister or Nobel prize-winner - are contextualised with captions and backstories by LRB writers and editors, as well as introductory essays by Mary-Kay Wilmers and Andrew O'Hagan. The result is an intimate account of forty years of intellectual life, which sheds new light on great careers, famous incidents and some of the history going on in the background: a testament to the power of print - and well-edited sentences - in the new information age.