Ten Years of the London Review Bookshop: A Personal View from the Boundary 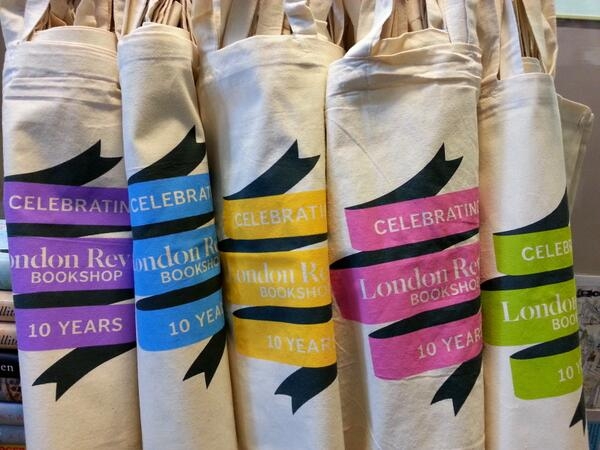 I was looking forward, a couple of weeks ago, to an event at this year’s Cheltenham Literature Festival (on my doorstep these days) entitled ‘My Favourite Bookshop’, a panel discussion to be chaired by Gail Rebuck. It was cancelled.

So whether the London Review Bookshop would have been championed by anybody, I can't tell you – but I like to think that it would have received at least an honourable mention. Much was written about the founding and early years of the shop. The press at the time were chiefly interested in it as a simplistic ‘David and Goliath’ story - how would, or even could, a small independent bookshop survive the onward march of chain and internet? Well, the Bookshop’s tenth anniversary has answered that question. As the founding manager (semi-retired), I am incredibly proud of all it has achieved, and grateful to the LRB’s editor for her vision in making it possible.

David Blow, writing in Publishing News, insisted that I had ‘the best job in bookselling’. Hyperbolic and London-centric, perhaps, but actually not far off the mark. We as booksellers were most interested in fashioning a bookshop of excellence in a relatively small space, to which intelligent and curious readers would want to keep returning. The books we chose were the result of fierce filtering: core stock, of course, but also those items designed to ‘surprise and delight’, such as translated works from small presses, political and literary periodicals, poetry pamphlets – the Bookshop’s poetry section is quite remarkable – spoken word CDs from the British Library and others, films on DVD and, for a time, secondhand books and modern first editions.

The books, unquestionably, are the thing. But the London Review Bookshop has also been important over the last ten years for the events it has hosted, supported from the outset by publishers great and small. I cannot think of any other bookshop in this country that has constantly and consistently, week in and week out, offered such a diverse contribution to our culture. Certainly the audiences seem to have appreciated it, along with the excellent wines we have served (thank you, Sebastian Peake).

Nobody who was there will, I suspect, forget Julian Barnes reading from The Lemon Table, or recitals by Geoffrey Hill, August Kleinzahler and Michael McClure. There were events for which tickets could have been sold three or four times over – John Berger, Christopher Hitchens, Christopher Ricks, Slavoj Žižek and many more. Visiting American novelists always caused much excitement: Harry Mathews, Lorrie Moore, Edmund White and Tobias Wolff spring to mind. Some of these evenings were filmed and almost all sound-recorded. With the Bookshop's website relaunch, a number of gems from the collection have been made available for the first time, and will be joined by still more in the coming weeks and months. And the events continue unabated, now augmented and enhanced by the Bookshop’s World Literature Series, which focuses exclusively on translation, including participatory Masterclasses.

Other memories are of off-stage moments, some of them quite bizarrely entertaining: Will Self and Iain Sinclair having a “difference of opinion” over the dinner table at Savoir Faire, three bottles of genuine absinthe mysteriously appearing on my desk during the evening of Jeremy Harding’s talk on Rimbaud and a young female Daily Mail reporter bursting out of my office in tears having tried to interview Alastair Campbell. And never in a thousand years had I expected to come face to face with Gerry Adams. My most surreal memory is not event-related at all. I had ascended the stairs from the basement one afternoon and glanced out at Pied Bull Yard. There was Peter O’Toole, kissing Vanessa Redgrave on the mouth. Yikes! Of course, as I discovered later, it was yet another Roger Michell film (Venus) being shot on our turf by seemingly invisible cameras.

I mentioned earlier the small space we had to deal with in setting up the Bookshop – a challenge overcome by the late Peter Campbell’s unerring eye for design. Peter instinctively understood the concept of ‘books do furnish a room’, and used spatial restrictions such as pillars so cleverly that you really can browse and explore without being aware of its relatively meagre square footage. When I was a young idiot in London in my twenties, I spent many hours at Compendium in Camden Town – wonderful cramped counter-cultural chaos. But that was then and this is now.

Where does the London Review Bookshop go from here? I recall a particularly Pooterish pronouncement I made to a journalist about five years ago: ‘You will not find an e-reader in the LRB bookshop’. Well, I wouldn’t say that now. The production, marketing and selling of books has gone digital, no question. But to paraphrase C. Day-Lewis, ‘a book is the precious life-blood of a master spirit’; I hope in future that for every digitised version available to readers, there will be also be a ‘real’ book, with a well-designed cover and printed on good quality paper, lurking on the shelf in your local bookshop.

If the London Review Bookshop were a 1970s American radio rock programme, it would definitely be on an FM station. It has been a privilege.