Through the Prism of History 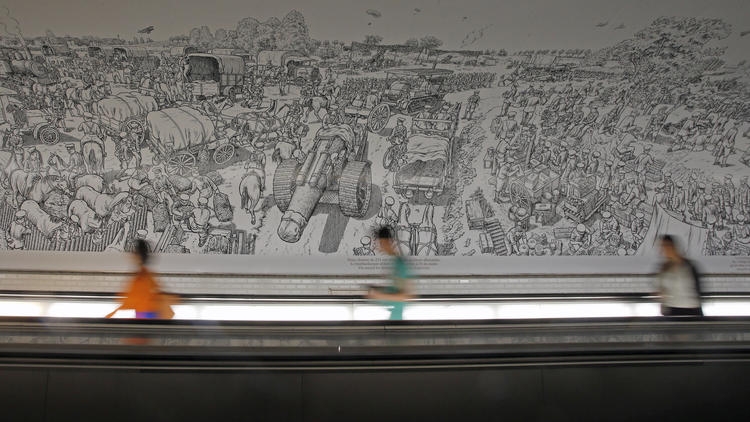 A conversation between historians Douglas Newton and Christopher Clark will be held at the Bookshop on 4 August, the anniversary of Britain’s declaration of war upon Germany.

As we approach the centenary of the First World War, there's something compelling about the game of parallel dates. On the 21 July 1914, for example, the French Ambassador informed Paris of first steps towards German mobilisation. That’s fairly dry as historical snippets go, but knowing that it happened on this day a hundred years ago makes it feel strangely immediate. There’s also an almost pleasant sense of doomed inevitability in watching these events unfold: we know how it's going to turn out, and it’s not going to be pretty.

Earlier this month, Joe Sacco's awe-inspiring single-panel panorama 'The Great War' was installed as a mural, stretching 500 ft, in a corridor of the Montparnasse station of the Paris Metro. The work depicts the first day of the Battle of the Somme, opening with General Haig walking in his garden as the preparations for battle commence and closing with the mass burials that followed the slaughter.

Sacco is best known for his portrayal of contemporary war-zones, so a detailed investigation of a hundred-year-old conflict might seem like a bit of a departure for him. When he spoke with David Boyd Haycock at the Bookshop last October, he didn’t see it that way.

Boyd Haycock commented: 'Those regions that you've written about in your journalistic work - Israel, Palestine, Iraq - what they're experiencing now is a knock-on effect; the war in ways created what we have now.' Sacco nodded in agreement: 'One thing in the West you should never forget is that when you go to Jenin and you're sitting with some old guy, he'll start talking about Sykes-Picot [the 1916 agreement which divided the Arab provinces of the Ottoman Empire]... And you realise, they don't forget; they look at the actions of the American government or the British government or the European government today through the prism of history.'

The political tensions that sparked the war certainly don’t seem antiquated. Christopher Clark, writing last year for the London Review of Books, notes: 'What must strike any 21st-century reader who follows the course of the crisis is its raw modernity. It began with a cavalcade of automobiles and a squad of suicide bombers: the young men who gathered in Sarajevo with bombs on 28 June 1914 had been told by their handlers to take their own lives after carrying out their mission, and received phials of potassium cyanide to do it with.'

And, contrary to the conventional narrative of our nation's journey to war, it appears that – not unlike the build-up to the Iraq war in 2002 – there was widespread opposition to entering the conflict from inside British parliament and in the country at large. In The Darkest Days, historian Douglas Newton examines how Britain was pressured into conflict by war-hungry leaders and the right-wing press. It's disconcerting to discover that a century after the war started, we're still trying to piece together what really went on during those weeks between the assassination in Sarajevo and Britain’s declaration of war upon Germany – and to realise that perhaps the conflict was not quite so inevitable, after all.

Douglas Newton will be at the Bookshop on 4 August in conversation with Christopher Clark. Book tickets here.