In the Neighbourhood: Pied Bull Yard 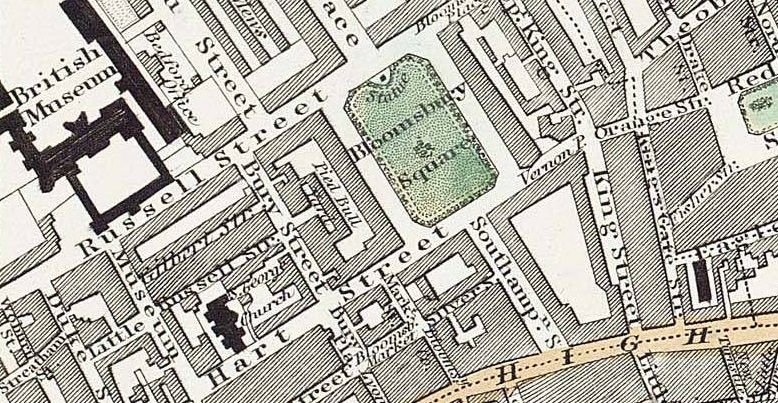 The name of Pied Bull Yard, the hidden court behind the London Review Bookshop, cannot be traced back earlier than 1827, we learn from the indomitable Londonist. An earlier map of 1746 gives it as ‘Stable Yard’, suggesting an inn, possibly serving the traders at the Bloomsbury street market (where the motorcycle supplies shop is now). If the pub ever existed, though, no record of it seems to survive. (The famous Pied Bull, mentioned in Defoe’s Journal of the Plague Year, was in Islington.) Johnstone’s London Commercial Guide of 1817 mentions a wine merchant, two printing and engraving workshops, a solicitor, a grocer and an ironmonger operating in and around Bury Place; perhaps the Pied Bull was the emblem of one of these establishments.

From 1608, one Nathaniel Butter sold books ‘at his shop in Pauls Church-yard at the signe of the Pide Bull neere St. Austins Gate’. In an age when booksellers were also publishers, we have a lot for which to be thankful to Butter: early editions of King Lear (the problematic Quarto text is known as the ‘Pide Bull Edition’), Chapman’s translation of Homer, A lamentable report of a great Tempest of Hale that fell in Kent (now sadly out of print). He was also responsible for two of the earliest English newspapers: the Corante, and News from Most Parts of Christendom. Sadly, it doesn’t seem very likely that his Pied Bull was anything to do with ours.

The Second World War Bomb Census, accessible through the useful BombSight app and website, shows a high-explosive bomb fell on Pied Bull Yard around Christmas 1940. Very likely – given it is the most recent building in the court – the present home of the London Review Bookshop arose from the ruins.

Any additional information on the history of the Bookshop's backyard would be gratefully received.