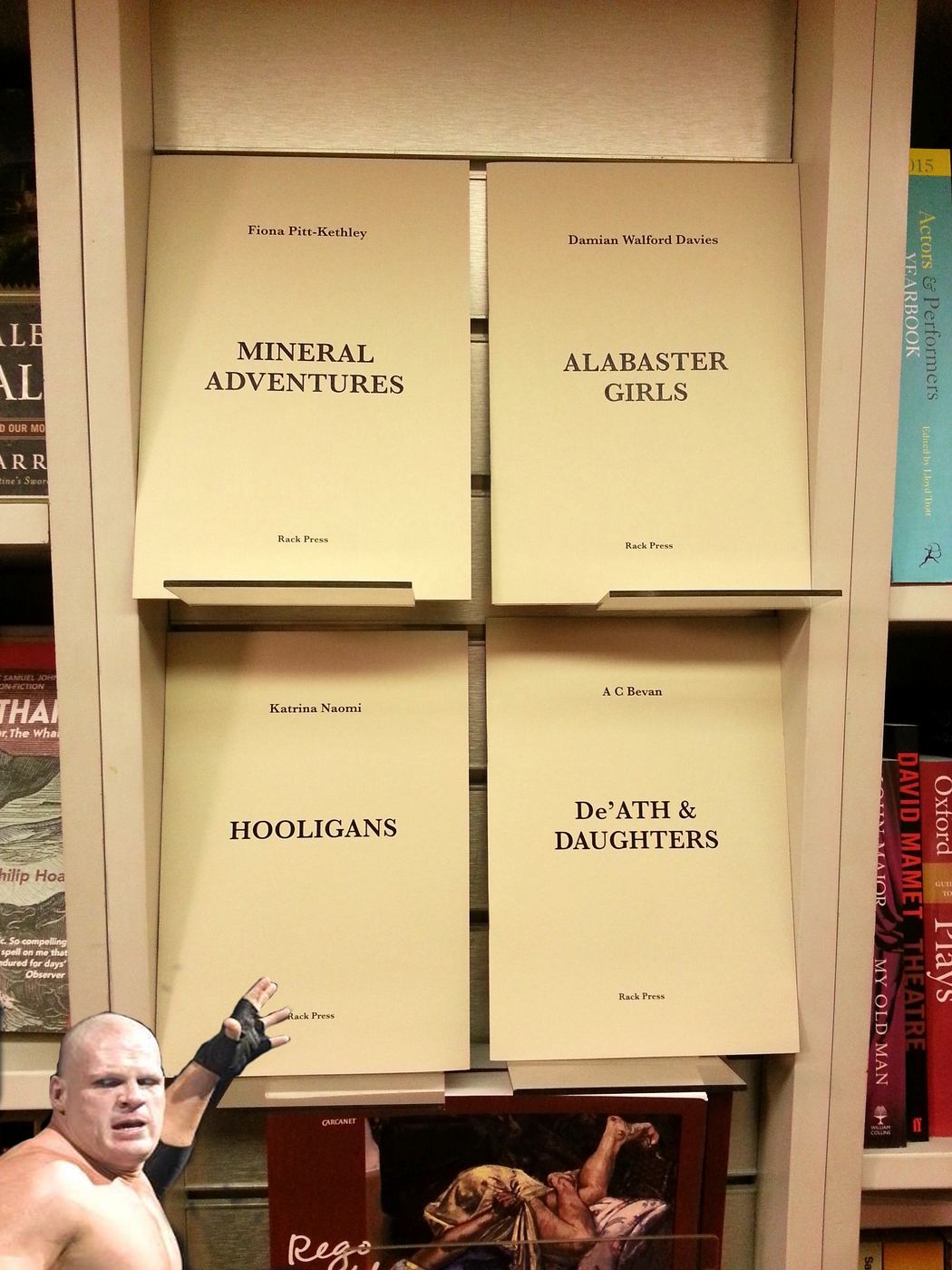 Probably it’s best for small presses to aim at doing one thing really well. Rack Press, run by the indomitable Nick and Sue Murray, has for ten years coming up this February produced lively, interesting poetry pamphlets in identical grey-beige covers. Four pamphlets are released at the start of each year; the bookshop has just taken delivery of the new batch, with titles from Fiona Pitt-Kethley (Mineral Adventures, an account of building up a stone collection which is much more exciting than it sounds), Damian Walford Davies (Alabaster Girls, whose high point is an excellent poem in couplets about a foolish attempt to break the land-speed record), Katrina Naomi (Hooligans, a family memoir of the Suffragettes) and A C Bevan (De’Ath and Daughters, which I’ve been desperate to read since seeing him in the shop for the launch of Magma 61, and which doesn’t disappoint).

Rack’s back catalogue is full of good bits. Katy Evans-Bush’s Oscar and Henry is a dramatic monologue double-act from Wilde and James; David Harsent’s Songs for the Same Earth was set to music by Harrison Birtwistle, and presents a subtly different text to the one eventually collected in last year’s Fire Songs (Faber and Faber). Ian Parks’s The Cavafy Variations are some of the best passes through the impossible-to-translate poet I’ve seen, and Richard Price’s ‘improvisations’ on the French renaissance poet Louise Labé (Lute Variations) are also thoroughly worth the price of admission. I think my favourite of their pamphlets so far, though, is David Kennedy’s Mistral – working in the genre Peter Riley has identified as modern French pastoral, the poems seem simultaneously open and reticent, quibbling and broadminded, likeable without fawning.

The press has had a very good year, winning the Michael Marks Award for Best Poetry Publisher. (Samantha Wynne Rhyderrch’s Rack publication Lime and Winter was also shortlisted for Best Pamphlet.) In their citation, the judges praised Rack’s ‘elegant simple design’ as well as ‘their mix of experienced poets and new voices, and the way their work engages with the world’. To which we say, yes yes very good, and may they keep on going for another ten years. All Rack’s 2015 pamphlets, plus all the pamphlets from their back catalogue which are still in print and a few which aren’t, are available from the London Review Bookshop at £5 a pop.