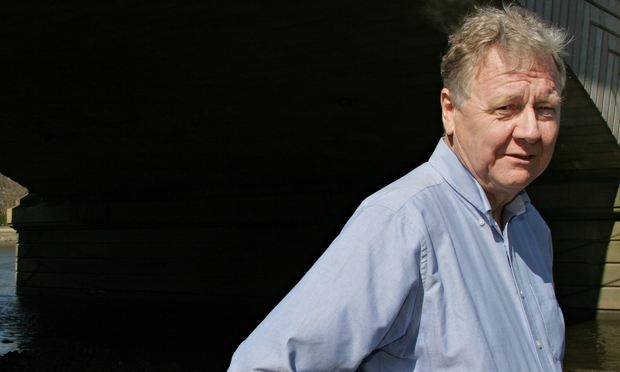 John Hartley Williams was little-known enough that, reading him, you felt party to a great literary secret, like stumbling across an astonishing restaurant down an unpromising back alley. I started with his long-out-of-print, Pynchonesque epic of the Wild West, Bright River Yonder, which literally fell into my hands one night in the rec room of the most northerly youth hostel in the UK (from an overloaded tower of books abandoned there by visitors).

After that his other books started to find me; I think I never had to consciously seek one out. A copy of Canada, apparently never borrowed since its acquisition in 1997, appeared suddenly on a library shelf I thought I knew back to front. Hidden Identities, his shifting and shifty debut, was left on a train by a passenger who got off at Peterborough and though I tapped and tapped the glass never turned his head. Annabel Haynes sent me The Ship on spec in the hope that I’d review it for her magazine, Dolour Dolour Dolour, and while I did turn in the full 20,000 words she’d requested on time and without asking for payment, the magazine folded two weeks before it could be published. An old lady in Durham, as payment for my clearing a wasps’ nest from under her eaves, offered me the choice of any volume from her shelves; the copy of Spending Time with Walter which my hand found itself drawn to felt, by that point, inevitable. My mother found a tatty copy of Blues in the glove compartment of her Mazda and passed it on to me, knowing my interest.

I moved to London, where in Walden Books off the Chalk Farm Road the proprietor placed a copy of Café des Artistes in my hand. ‘You’re keen on unusual association copies, aren’t you?’ he said. ‘Have a look at this. I’ll let you have it for two pound fifty – I think it might be worth a little more, but, speaking frankly, I’d like to get it out of the shop – there’s something, I don’t know, something not quite right about that book.’

I bought it, of course, though the association was fairly dull – the top left corner bore the ownership signature of Jerzy Pietrkiewicz, the Polish poet, translator and sometime husband of Christine Brooke-Rose. It was only later that I realised the significance, and the reason for the bookseller’s misgivings. Pietrkiewicz died in October 2007; Café des Artistes was not published until late 2009. Still, there was no mistaking the scrawl. I asked Peter Fry, the Jonathan Cape sales rep, whether there was any possibility the book might have been an early proof; checking his diary, he was adamant that no copies could have been produced, that the manuscript itself had not been turned in before 2008.

Williams had read in the bookshop before – he was scheduled to read again, but in the event was too ill to do so. I saw him just the once, reading in Durham like a force of nature, each line apparently as strange and surprising to him as it was to the audience. When I heard he’d died, I went back to Café des Artistes and Williams’ wonderful ‘Jazz Recipe’:

Throttle the gas. Arrest those ladle-loopings.
Can't have that look of I told you so
floating there like Mrs. Beeton's conscience.
Douse the sniffs. Cap the sighs. Reduce the pan
to silent grumps of cool. No answers to
questions now. Slabber trickles down pantry walls.
Good cooks know authenticity. They know. So
draw a chair up to the kitchen table. Grieve.

On 14th July, the London Review Bookshop will host an evening in memory of John Hartley Williams, celebrating his life and work with music and poetry, including readings from Jo Shapcott, Matthew Sweeney, Ruth Padel and John Lucas. Like everything Williams wrote, it will be a treat.