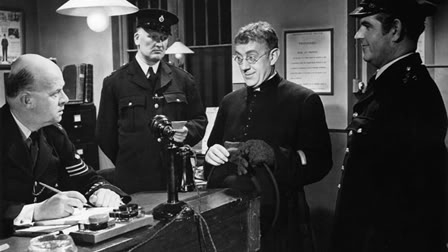 This is a ranking of all G.K. Chesterton’s Father Brown stories, which to my taste are the best short mystery stories I’ve read. I admire their freedom with genre and setting, jumping easily from Gothic horror (‘The Worst Crime in the World’) to Italian banditry (‘The Paradise of Thieves’) to quintessential British sci-fi which wouldn’t be out of place in Doctor Who (the army of robotic household servants from ‘The Invisible Man’). Father Brown is a Catholic priest and amateur detective, much given to Chestertonian pontificating. Flambeau, his sometime nemesis and sometime companion, is a vast athletic French cat burglar.

The stories were published over a period of about 20 years, and get steadily worse as time goes on, although his last book, The Scandal of Father Brown, is a late flowering. Really, though, it is worth buying the substantial Penguin Complete, which contains all of them: in my ranking system, only scores of 4 and below correspond to ‘unreadable’. The two unpublished stories ('The Donnington Affair' and 'The Mask of Midas') should have remained so. I've not seen any of the recent TV series starring Mark Williams, but the old one from the 70s was awful - watch some Morse repeats instead. (Gayle assures me there is an American TV series, which is also tiresome.)

These are personal scores, of course. I should be particularly interested to see any rival Top Tens.

The Blue Cross
7/10: Perfectly good introduction to the characters, not really a mystery.

The Secret Garden
10/10: Eminently quotable masterpiece, wonderful decapitation plotline. A lesser author could have strung this out into a novel…

The Queer Feet
9/10: …whereas this is definitely a short story, but what a fine one.

The Flying Stars
7/10: Wonderful set-up, but the solution involves the first appearance of a Chestertonian narrative trope which will grow increasingly tiresome as these stories go on.

The Invisible Man
10/10: The best thing he wrote, and my contender for the best short story ever.

The Honour of Israel Gow
9/10: ‘I mean that the great devil of the universe may be sitting on top of this castle at the moment, as big as a hundred elephants, and roaring like the Apocalypse.’

The Wrong Shape
9/10: Another treat, somehow much more satisfying than it feels like it should be, given the mystery will probably not tax anybody at all. If you don’t solve it three pages before Father Brown you are not paying attention.

The Sins of Prince Saradine
5/10: If it appeared in one of the other collections, this might edge a 6, but it would still be the worst in the book…

The Hammer of God
8/10: …whereas if this appeared in another collection it would be the highlight, but here it’s scarcely an album track.

The Eye of Apollo
4/10: OK, ‘Prince Saradine’ is maybe the second worst in the book.

The Sign of the Broken Sword
9/10: Every detective seems to get a historical cold case at some point, but not many as well-told as this.

The Three Tools of Death
6/10: Fine, but nobody would have shed any tears if the book ended on ‘Sign of the Broken Sword’.

The Absence of Mr. Glass
6/10: One of the best set-ups and silliest solutions in the Father Brown canon.

The Man in the Passage
6/10: Not much excitement, you’ll solve it long before Father Brown, but at least it’s short.

The Mistake of the Machine
7/10: [SPOILER ALERT] The exact same mystery as ‘The Man in the Passage’, told slightly differently with different scenery, somehow a little more satisfactory.

The Head of Caesar
7/10: Fine, but nothing special.

The Purple Wig
8/10: One of the best in this collection.

The Perishing of the Pendragons
8/10: This is good as well.

The God of Gongs
4/10: Chesterton was about as racist as everyone else in the 1910s, but it doesn’t normally impinge on the stories. It does here.

The Salad of Colonel Cray
6/10: Has gained an extra point by having the best title Chesterton ever came up with, but the story is nothing special.

The Strange Crime of John Boulnois
7/10: A bit of a treat this, after a run of duds. A better setting, a little tightening of the characters, and it could easily bump itself up into the top rank of this collection.

The Fairy Tale of Father Brown
4/10: Unlike this dud, which I can’t imagine being of interest to anyone.

The Incredulity of Father Brown (1926)

The Resurrection of Father Brown
5/10: Very odd and unsatisfactory.

The Arrow of Heaven
4/10: There’s a run of duds coming I’m afraid. This one is particularly long,

The Oracle of the Dog
4/10: and this one is particularly silly in its mystery,

The Miracle of Moon Crescent
4/10: though not nearly as silly as this one,

The Curse of the Golden Cross
6/10: and this one (Father Brown’s version of ‘The Mummy’) is not dreadful, exactly, but a long time getting to not much pay-off,

The Dagger With Wings
4/10: and this one is plain dull.

The Ghost of Gideon Wise
5/10: Also not bad, but depends for its solution on the fine points of people’s characters, which Chesterton was never very good at.

The Mirror of the Magistrate
5/10: Wait a minute, haven’t we had this before? Yes we have – it’s yet another version of ‘The Man in the Passage’.

The Man With Two Beards
8/10: Short, quiet, hellish, not much like Father Brown but a fine story all the same.

The Song of the Flying Fish
5/10: More like Wilkie Collins than Chesterton, and not the better for it.

The Actor and the Alibi
5/10: Forced and overlong.

The Vanishing of Vaudrey
6/10: Better, but borrowed entirely from ‘The Secret Garden’.

The Worst Crime in the World
8/10: This is a good one too – probably the best in the collection. Sinister castle, and a crime which thoroughly lives up to the title.

The Chief Mourner of Marne
5/10: I’m still not sure I quite follow the plot of this.

The Scandal of Father Brown
2/10: Not a mystery, barely readable, baffling why this was included.

The Quick One
10/10: Genuinely superb, and after such a poor first story gets this book off to a flying start.

The Pursuit of Mr. Blue
5/10: Father Brown assists a private detective in a thoroughly unexciting mystery.

The Crime of the Communist
7/10: Likeable Oxford murder, not bad at all.

The Point of a Pin
9/10: Strange, troubled, like a bad dream, but with a horrible insistent logic running right through it.

The Insoluble Problem
6/10: I bet you get it before Father Brown does, but given that it’s such an obvious solution it’s very impressive of Chesterton to only use it at the very end of this long run of stories.