Dancing in the Dark 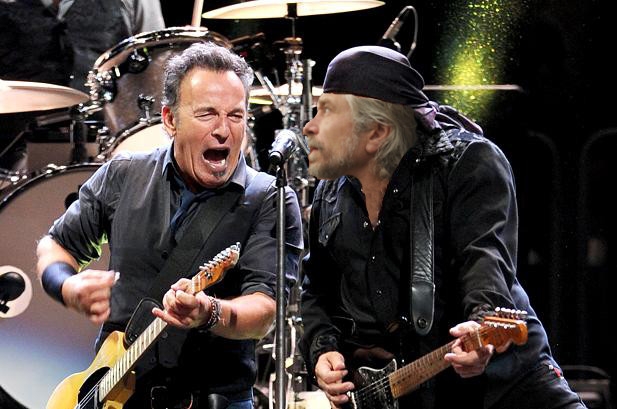 Karl Ove Knausgaard's latest volume, Dancing in the Dark, gives us Knausgaard aged 18, moving to the small town of Håfjord in the Arctic Circle to become a high school teacher. It joins the pantheon of books taking their title from songs by Bruce Springsteen, 'The Boss'. In his LRB Bookshop interview with Knausgaard, Andrew O’Hagan did not raise this important point; we’ve remedied the oversight, by inviting some of our most popular authors, booksellers and book lovers to give us their own opinion on their favourite Springsteen hit.

JOHN SAYS: I am very fond of ‘Highway Patrolman’, although I must say Springsteen’s version is an unmitigated dud next to Johnny Cash’s, who tidies up the scansion and the second chorus. Still, a haunting tale of brotherly love and the tensions between the state and the individual.

DAVID SAYS: For me, the stomping, soaring, raw energy of ‘Born in the USA’ is hard to beat. The moment where it topples into the refrain is unmistakeably Bruce. It’s a little-known fact that Bruce Springsteen was, in fact, born in Billericay, Essex.

CHARLIE SAYS: I am no enthusiast for the Boss, but I am an admirer of Ian Boss-tridge.

MARCEL PROUST SAYS: For a long time I would go to bed early. I’d get up in the evening, and didn’t have nothing to say; I’d come home in the morning, and go to bed feeling the same way; I wasn’t nothing but tired: man, I was tired and bored with myself. Hey there baby, I could use a little help. You can’t start a fire: you can’t start a fire without a spark, this gun’s for hire, even if we’re just dancing in the dark.

NATALIA SAYS: Nobody would call it Springsteen’s most musically innovative track – but ever since I saw Bruce in concert with the E-Street Band in 2008, I’ve had a soft spot for ‘Brilliant Disguise’, the penultimate number of the evening before the first encore. The sun was going down behind the stadium, and as soon as the first chords kicked in the crowd were already singing along. I’ve heard a couple of bootleg recordings of that gig, but nothing captures the sheer energy of being there on the night.

GEORGE ORWELL: The refrain of ‘Born to Run’ – ‘Tramps like us, baby we were born to run’ – reminds me of when I was 25 and pretended to be a tramp. For the same reason, I also enjoy David Bowie’s 1974 smash, ‘Rebel Rebel’.

GAYLE: I am on holiday, but will contribute to this feature or article when I return.

TERRY: I was always a bit of a fan of ‘The River’ as a teenager, because it seemed like that was what you had to do, growing up in the suburbs.

MEGAN: He did an album of American folk songs, didn’t he? (DAVID interjects: Yes, he did a very good ‘John Henry’.) Well, those ones are far more to my taste than his regular material.

RACHAEL: ‘Born to Run’ was the first album my brother ever owned, so it’s all sentimental for me – if I had to pick one track, it would be ‘Thunder Road’.

THE SWEDISH ACADEMY (SVENSKA AKADEMIEN): For the art of memory with which he has evoked the most ungraspable human destinies and uncovered the life-world of teenagers in the Rust Belt, we have to agree with John and say that ‘Highway Patrolman’ is a proper tune.