A Séance in Bloomsbury: Our Little Black Classics Awards 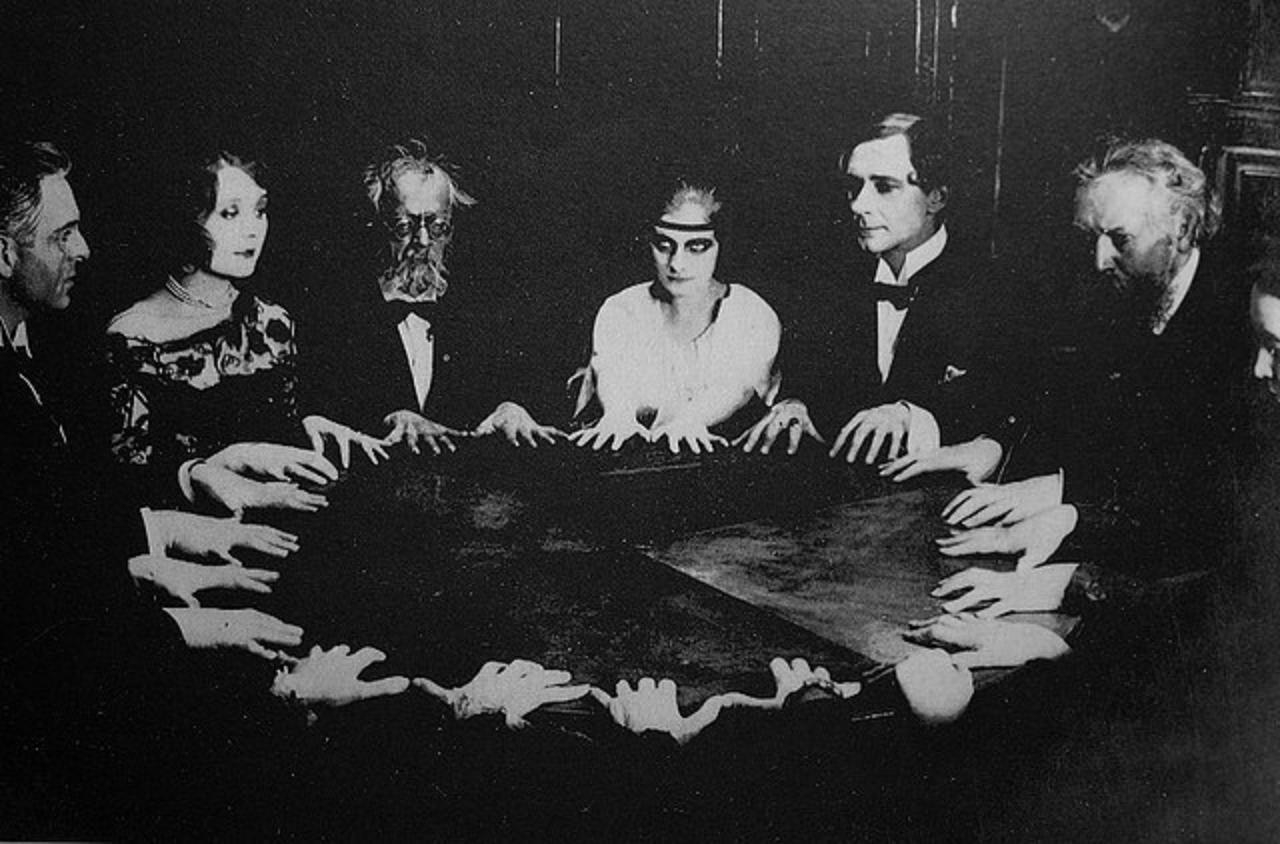 A chilly wind blew through the inexpertly stoppered keyhole, and in the basement the lights fizzled and dimmed. The staff of the LRB Bookshop were gathered around the fancy table, together with Fox and Dana, two representatives of Penguin Random House who had been sent to oversee proceedings. It was 8pm, and the Official Penguin Little Black Classic Séance and Award Ceremony could begin in earnest.

‘You all know why you have been summoned here’, intoned Natalia, pulling up the hood of her bookseller’s robe, its emblazoned moons picked out in delicate silver thread which shimmered like fishscale in the candlelight. ‘By solemn oath we are committed to making the bestselling Little Black Classic our Author of the Month. There Can Only Be One, unless by some mischance there’s two LBCs with the same sales figures, in which case we’ll fudge it somehow. On with the séance! Booksellers, link hands!’

The two Penguin representatives pulled straws from behind their ears so they could keep on drinking their red wine. It was clear they’d been to a few séances in their time and had come prepared. ‘Our first guest from beyond the grave this evening is Constantine Cavafy. CC, are you there?’

A low wind howled outside, and Charlie knocked the underneath of the table with his knee facetiously. Dana screwed her eyes closed. ‘I don’t believe in ghosts, I don’t believe in ghosts’, she whispered. All at once a pall sunk over the scene, and a voice was heard at once everywhere and nowhere, a familiar Alexandrian twang but in a very low tone, as though the words were being spoken through a rolled-up newspaper. ‘Why do you disturb my endless slumber?’

‘No, you’re joint seventh with Catullus. But congratulations all the same.’

‘Eheu’, cried the ghost of Catullus, who’d popped up in the meantime. ‘I had such high hopes. Fieri, et excrucior.’ But the two spooks collected their trophy all the same, and then disappeared back into the ether.

‘Next up, in joint sixth place, Charlotte Perkins Gilman and Guy de Maupassant.’

There was an ominous gurgling, which turned out not to be a ghost at all, but the Penguin reps slurping up the last dregs of the wine. Gilman and de Maupassant appeared for a moment and vanished; Fox had broken hands with Gayle so he could refill his glass. Nonetheless, the trophy had disappeared, and all present decided that the prize could count as thoroughly awarded, and on with the ceremony.

‘Jane Austen, Jane Austen, we summon you!’ No effect, and so Natalia repeated the cry, which the other members of the bookshop team also took up, lengthening the ‘youuuuuu’ into a tiresome howl. Finally an ectoplasmic visiting card dropped onto the table. Claire picked it up at once.

‘Ms. Austen regrets that she cannot attend this ceremony, especially given that she’s only in fifth place, which she considers poor reward for her contribution to the development of the English novel. And so you miss your chance with one of the lords of life.’

‘Isn’t that a quotation from Lawrence? Hard to imagine those two hanging out together in the great beyond.’

‘Well, we’ll never get a chance to ask her now’, said Natalia crossly, ‘and anyway this ceremony is overrunning rather. Who’s next?’

‘In fourth and third place respectively: Anton Chekhov, and Sappho!’

Both spirits rose from the vasty deep, and shuffled forward to collect their rewards. Thinking quickly, Gayle shunted a stack of books in front of a gun which had been left on the mantelpiece. But Chekhov was actually a very jolly phantom, joshing with Sappho and patting her shoulder in a tiresome manner.

‘Good work, Saph! Third place! Not bad eh? Want to hang around and see who the winner is? Maybe grab a kvass after?’

‘Not on your [ ]’, hissed Sappho, and vanished into the ether as soon as she laid hands on the trophy. But Chekhov did, indeed, hang around, swilling red wine straight from the bottle, leaning against the poetry section and getting ectoplasm on the books.

‘Remind me to call Kelvin in the morning about getting in an exorcist’, said Natalia, and not very under her breath either.

‘In joint second place!’ announced David, ‘Baltasar Gracian, with How To Use Your Enemies, and Walt Whitman, with On The Beach at Night Alone. Congratulations, Walt and Balt!’

I’d been a little worried that they wouldn’t get on, Gracian being a stern Machiavellian Spanish priest from the 17th century, and Whitman being Whitman. In fact, they were inseparable. Third place was a tub of Quality Street, and second place a bottle of (cheap) champagne; which they shared, Whitman digging deep into the fondant creams (which Gracian was no fan of), Gracian doing sterling work on the toffee pennies (which Whitman normally left at the bottom). When they’d finished the champagne, Whitman proposed heading off to the Norfolk Arms on Leigh Street, and they rolled out of the shop with their arms around each others’ shoulders, and calling each other compañero.

Cheered by this display of good nature, the booksellers broke hands in order to pour more wine. Terry came downstairs with some rye bread and seared corn, courtesy of the Cake Shop, Charlie stuck on a Kris Kristofferson CD, and things got thoroughly mellow. At about eleven-thirty, John headed home on the basis that he ‘had to stop burning the candle at both ends’, and gradually the party dispersed. Only the next morning, when they were putting out the stock, did Natalia realise that they’d forgotten to award first prize.

As the thought struck her, a strange change came over her features, her head spun round on its axis, and her voice grew strangely distorted.

‘IT IS I, MICHEL DE MONTAIGNE, RIGHTFUL WINNER OF THE LITTLE BLACK CLASSICS COMPETITION.’

Gayle was nursing a slightly sore head, but noticed all the same that the voice bore a striking resemblance to TV’s David Suchet. This, however, she did not remark on, judging correctly that the spirit was in a furious temper.

‘I WILL HAUNT YOUR SHOP FOR A MONTH’, Montaigne growled. ‘A MONTH AT LEAST. IT IS DISTINCTLY POSSIBLE THAT YOU WILL NEVER BE RID OF ME.’

At that moment, Terry was heading out of the Cake Shop with a jug of holy water and two muffins baked in the shape of a crucifix, which she had been preparing for a party of bishops who were after a late breakfast. Thinking quickly, she threw the contents of the tray over Natalia’s head. Montaigne gave an unearthly howl and manifested as a ball of brilliant white light, which started to unravel, each second becoming darker, until all that was left was a single hard point of blackness. Charlie scuffed it with his boot and all was revealed – it was Michel de Montaigne’s Little Black Classic, How We Laugh and Weep at the Same Time.

‘He’s imprisoned in the book now’, said Charlie, ‘like in that episode of Buffy the Vampire Slayer. It’s perfectly safe, as long as no-one buys or reads the book. That will surely release him, stronger than ever. And when he returns he’ll be wise to Terry’s trick with the muffins.’

‘But if we can’t sell him, who’s going to be our author of the month?’

‘There’s a poet from Cambridge with a new book out’, piped up John from a corner, to a chorus of groans.

‘No, there’s no need for that’, said Natalia firmly, more or less recovered from her ordeal. ‘We should just put a disclaimer at the end of a long bit of text which no-one’s going to read. Here will do.’

AUTHOR OF THE MONTH FOR JUNE

CAUTION BOOKS MAY BE CURSED