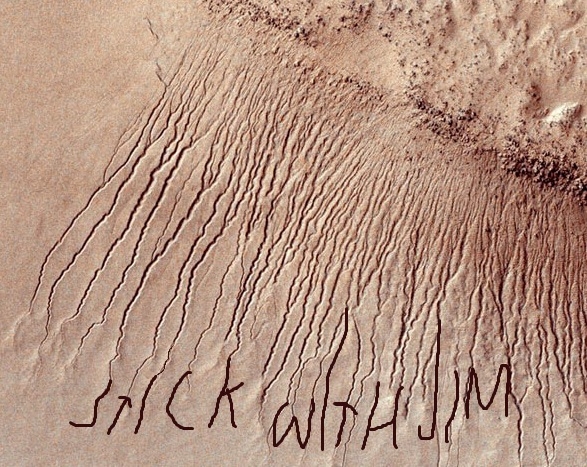 The hacks filed grumpily back into the press room. ‘I wish I knew what this was about’, muttered the Daily Record’s Science Correspondent to a chorus of affirmation. ‘Fly us out here to announce they’ve found water on Mars – big fanfare – and no sooner have we got the stories filed, and our bags packed, than it’s back to the press room for another “Special Announcement”. If I didn’t know better, I’d say NASA were flying blind. This had better not be a retraction.’

‘Sure doesn’t sound like a retraction. I spoke to their press chief last night and he told us to keep the front page clear – that today’s scoop had all the signs of being the big one.’

NASA’s Administrator, the avuncular Charles Bolden, crossed the stage to the podium. He looked shaken, sleepless. The noise died down almost instantly. He cleared his throat and began.

‘Ladies and gentlemen. Last night, some of you may have been watching the Forward Prize ceremony in London, England. As you doubtless saw in the early papers, the well-deserved winner was Claudia Rankine, for Citizen (Penguin). Mona Arshi won Best First Collection for the marvellous Small Hands (Pavilion), and Clare Harman won the prize for Best Single Poem with ‘The Mighty Hudson’. (Dead good, that one.)’

The hacks looked puzzled. They were all well aware of the Forward Prize results – the news had come through on tickertape just hours earlier.

‘The possibility of these predictions paying out through chance alone is negligible. Ladies and gentlemen, it seems very likely that what we are dealing with is something….Not Of This Earth.’

‘Last night, we despatched the Curiosity Rover to an unusual Martian rock formation near Mount Sharp. The images it beamed back were – to say the least – revealing.’

‘Perochlorates on the crater rim. We’ve seen pictures like this before, but look closer.’

As the curiosity’s nozzle-eye camera zoomed in, the dark streaks resolved into ‘STICK WITH JIM’. The hacks cheered audibly.

‘But the news I have for you this morning is stranger and darker than this. Ladies and gentlemen, shortly after this picture was transmitted, all contact with Curiosity was lost. The Rover has gone dark. A shadow has fallen over Mars.’

‘I have here the Curiosity Rover’s last transmission. Our scientists are trying to decode it now. When we know more, you will too. In the meantime, I implore you, find Lucky Jim, before he returns to his home planet!’

Bolden exited stage left. The hacks stared up at the last transmission.