The Hypnotic Subject: Ahad Ha'am on Civilisation, Diaspora and a National Home 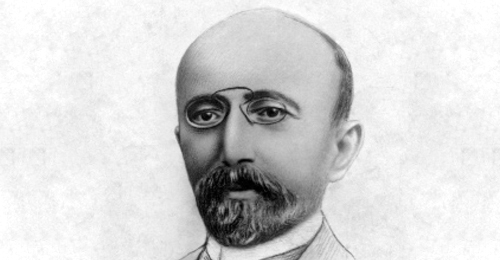 History remembers Ahad Ha'am (the pen name of Asher Ginsberg, 1856–1927) as one of the 'founding fathers' of Zionism. In fact, his project of a 'national rebirth' of the Jewish people led him to be a fierce critic of the political Zionism of Theodor Herzl. Moreover, his essays – miniature masterpieces of form and style – are full of insights into humanity, and laced with a withering wit. These brief extracts from Words of Fire, a selection of his essays published recently by Notting Hill Editions, give a glimpse of his thought and the clarity of his style.

Every civilized man who is born and bred in an orderly state of society lives all his life in the condition of the hypnotic subject, unconsciously subservient to the will of others ... Language and literature, religion and morality, laws and customs — all these and their like are the media through which society puts the individual to sleep, and constantly repeats to him its commandments, until he can no longer help rendering them obedience.

[Our] school of thought differs from those who claim to be the ‘real’ Zionists in refusing to believe in the possibility of transferring all the Jews in the world to Palestine, and consequently in refusing to accept the proposition that we cannot survive in the diaspora. On the contrary, it holds that dispersion must remain a permanent feature of our life, which it is beyond our power to eliminate; and therefore it insists that our national life in the diaspora must be strengthened. But that object, it holds, can be attained only by the creation of a fixed centre for our national life in the land of its birth.

[The historic right of the Jewish people in its ancestral land] does not override the rights of the other inhabitants, which is a tangible right based on generation after generation of life and work in the country. The country is at present their national home too, and they too have the right to develop their national potentialities so far as they are able. This position, then, makes Palestine common ground for different peoples, each of which tries to establish its national home there; and in this position it is impossible for the national home of either of them to be complete and to embrace all that is involved in the conception of a ‘national home.’

Brian Klug and Jacqueline Rose join us at the Bookshop at 7 p.m. on Wednesday 20 January to discuss 'Words of Fire'. Book tickets here.