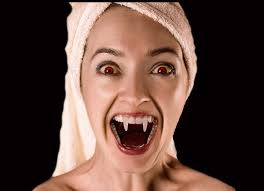 Which literary characters are potentially vampires? We surveyed a wide audience on Twitter and elsewhere, and the following names kept recurring. Obviously we wouldn’t tell the Watcher Council how to do their business, but it might well be worth investigating:

Causabon (Middlemarch), who is described as someone who ‘lives too much with the dead’.

George Smiley (A Legacy of Spies), who by the time of his most recent adventure is over 100 years old. He was potentially ‘sired’ by his Oxford tutor, Jebedee.

Jeeves , who is tall and efficient and potters about a lot. Other Wodehosian vampire suggestions included Wooster (prefers to stay in bed all day), Bingo Little, and Madeline Bassett, who at one point seems to float rather than walk.

Hamlet, who says ‘Now could I drink hot blood’, a classic vampire giveaway.

Krook (Bleak House), who spontaneously combusts under circumstances even more mysterious than usual, and Miss Havisham, were the two Dickensian favourites. Whether Charlotte Bronte ever wrote a non-vampire character is open to debate. As well as obvious candidates, like Mr Rochester, Bertha Mason and St. John Rivers, Jane Eyre herself was mentioned more than once - on a basis of 'can't trust the quiet ones' - and the Reed children have been positively identified as a vampire clan or 'brood'.

None of these vampires could possibly be Dracula's father, however. If you want to find out who might be, join us on the 9th November to hear John Sutherland and Martyn Rady discuss this vital and perplexing business.