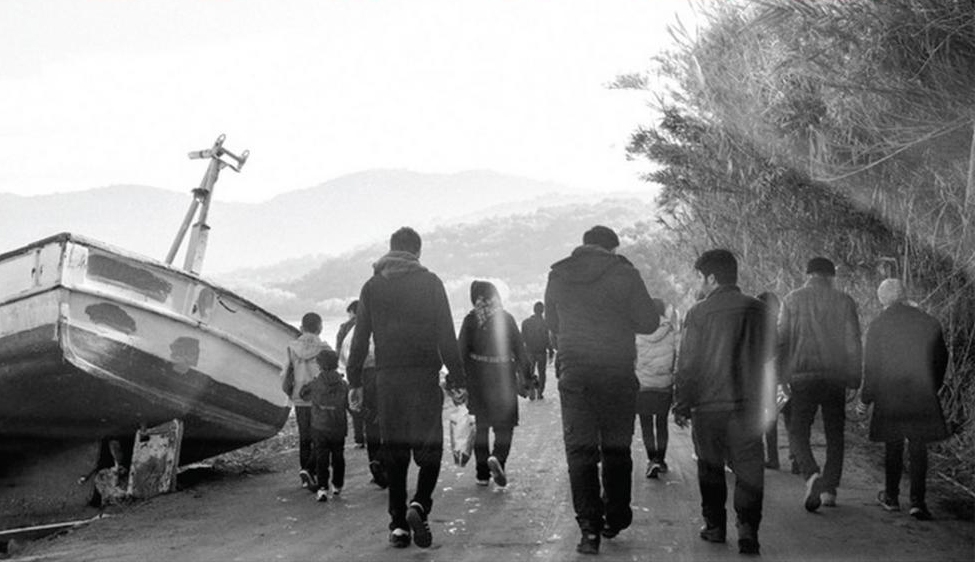 EVENT: Ziad Ghandour, Marchu Girma, Teresa Thornhill and Daniel Trilling will be discussing stories from Europe’s refugee crisis at the Bookshop on Monday 21 May. Book tickets now. Below, in an extract from her book Hara Hotel, Thornhill considers the British antipathy to Syrian refugees, in conversation with a group of them in the Hara Hotel camp close to the border with the Former Yugoslav Republic of Macedonia.

‘You’re from Britain, aren’t you?’ Abu Anas was studying my face again. ‘Where did you learn Arabic?’

He listened politely as I gave my usual explanation. ‘Don’t apologize, you speak very well! Arabic’s not an easy language. And look at us, we don’t speak English, we don’t speak German . . . Okay, Mahmoud here speaks a bit of German’ – he nodded at a bearded man sitting at the end of the table, who was listening with an air of amusement – ‘but the rest of us don’t.’ He leant towards me across the table. ‘We’re delighted to have you here helping us, T’reza. It’s a treat to meet a western woman who speaks our language. Everyone comments on it – everyone!’

This was not the first bit of appreciation I’d received, but it was the bluntest, and it touched me. ‘I’m so sorry you can’t all come to the UK,’ I said by way of response. ‘You know, lots of ordinary people in Britain want to take in Syrian refugees. It’s our government that’s the problem.’ I hesitated. ‘Okay, there are some people who don’t want refugees, but many of us would like you to come.’

A square-jawed man to Abu Anas’s left interrupted. ‘Really? They want us?’

‘Everyone has seen the pictures on TV. They understand how desperate things are for you. So it’s not really the people that you’re up against, it’s the British government.’ As I spoke, I hoped I wasn’t gilding the lily. The desire to take in more refugees was certainly common in the circles I moved in. I should stress that this conversation took place before the shock of the Brexit referendum.

Abu Anas picked up his cigarette. ‘So what is it with the British government, why won’t they let us in?’

‘Yani, lots of reasons, but a big one is fear. Especially after the attacks in Paris and Brussels.’ All the men around the table nodded. ‘They think that if they let you in, there’ll be more attacks.’ As I spoke I thought how illogical this was; the majority of the perpetrators in both incidents had been French- and Belgian-born European Muslims of North African descent. Just two of the men involved in the Paris attacks had registered as Syrian refugees in the Greek island of Leros a few weeks earlier. If they’d been barred from entering Schengen, would the attacks have been aborted? I doubted it.

Abu Anas sucked his teeth and shook his head. ‘But members of Daesh (ISIS) don’t travel like this, trudging across Europe on buses and sitting in refugee camps.’

I was intrigued. ‘How do they travel, then?’

Several of the men spoke at once, but Abu Anas’ voice was the loudest. ‘In luxury, by aeroplane! They have lots of money, they can buy decent forged documents.’

I took a swig of tea, picturing a bunch of men dressed in Daesh’s signature black, beards newly shaved off, sitting with legs outstretched in the first-class section of an aeroplane, dozing or playing on their mobile phones.

Abu Taweel seemed to read my thoughts. ‘I take it you know there’s an agreement between Bashar and Daesh? They don’t attack each other’s forces, do they? Have you noticed that?’

Now all the men around the table joined in. ‘It’s well known,’ Mahmoud announced, leaning forward in his chair. ‘Bashar never touches Daesh. Look, if you think about it, Bashar’s very happy to let them sit there in the north-east. Why? Number one, because he gave up on that region long ago. Number two, because, as long as they’re there, with their so-called Caliphate, the west will let him control the rest of the country.’

Another man chimed in. ‘It’s like an insurance policy. Daesh is insurance for Bashar. So long as Daesh is there, Bashar can stay too. Mutual protection, you could say.’

I’d not heard this theory before and my heart sank as I listened.

‘Hara Hotel’ is published by Verso, price £16.99. Teresa Thornhill will be joined at the Bookshop by Ziad Ghandour, Marchu Girma and Daniel Trilling on Monday 21 January. Book tickets here.