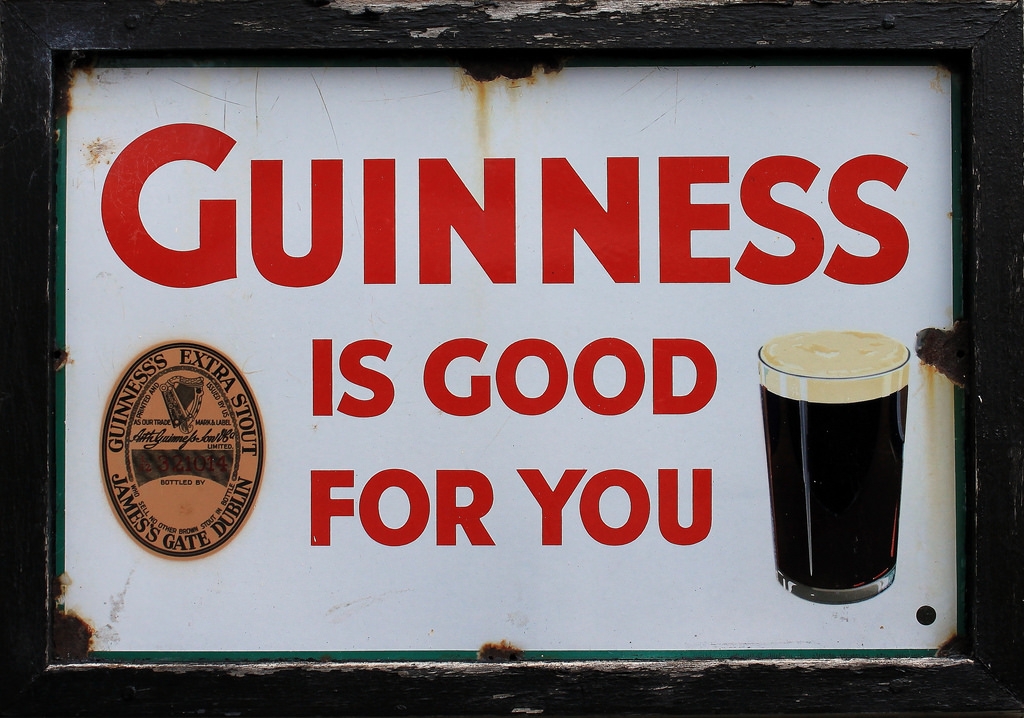 I have been thinking about Guinness quite a lot recently. Dorothy L. Sayers, our current Author of the Month, worked in advertising and is responsible for not only the familiar Guinness toucan but the slogan “Guinness is good for you”!

My family run the bookstall at the Shalfleet Village fête and this year, just like every year, we had several donated Guinness World Book of Records units to shift. Mission accomplished, £1 a pop.

On Monday, I went for a sizeable curry with an American friend and, when we nipped to the pub for a digestif nightcap afterwards, he ordered, then sank, a pint of Guinness!

In 2013 I was in an inter-university poetry slam in a room above The Bristol Pear in Birmingham. I had a pint of Guinness in my hand as I took to the stage. Afterwards, my friend asked why. ‘It’s delicious and I haven’t had any dinner,’ I replied. The main reason I’m mentioning this is because Phoebe Power was also competing in that slam and she is a Forward Prize-winning poet now.

On Tuesday 18 September in the Southbank Centre’s Queen Elizabeth Hall, a bejumpered William Sieghart explained that the Forward Prizes and the Forward Book of Poetry took inspiration from the Guinness Book of Poetry. This book, published mostly in the 1950s, was filled with poems deemed excellent and all published in the same year.

You all know by now who won on Tuesday night. Not just Phoebe Power, who won the Felix Dennis Prize for Best First Collection with Shrines of Upper Austria (Carcanet), but also Liz Berry who won the Forward Prize for Best Single Poem for ‘The Republic of Motherhood’, first published in Granta Magazine and now available to read in her Chatto pamphlet of the same name. Danez Smith won the Forward Prize for Best Collection. They read utterly brilliantly from their utterly brilliant book, Don't Call Us Dead (also Chatto), and I was reminded of the similarly roof-raising reading they did at the bookshop with Kayo Chingonyi earlier this year. You can listen again to that here.

You all know how difficult those three decisions must have been (indeed ‘invidious’ was said more than once). You all know how fantastic, talented, varied, daring these books can be - if you don’t then you really ought to come and buy them from us. Jorie Graham’s shortlisted poem ‘Tree’ was originally published by the LRB and we have copies of the very issue it appeared in. Will Harris was shortlisted in the same category for his stupendous poem ‘SAY’. That was published in the Poetry Review but Will has a new poem in the new issue of the LRB which came out this week. Another point of pride (and podcast of note) is that we hosted a wonderful reading with shortlisted poets Richard Scott and Kaveh Akbar in March. I suppose what I’m getting at is there is a lot to get excited about in our poetry section and the poetry world. Poetry, Dorothy, poetry is good for you.

If you don’t mind, much like my friend of seemingly limitless appetite, I’m going to finish with Guinness. When I learnt about the advertising Sayers had thought up for them, I considered the brand's subsequent marketing efforts. They had that mad advert with the surfers and the horses of course, and they had a slogan for a while, "out of darkness comes light" (incidentally also the motto for the city of Wolverhampton). Light and dark were mentioned on Tuesday more than once - Quel surprise at a poetry event, you might say, but I'm being serious now - and it wasn’t nearly as simple as Guinness might have you believe.

Liz Berry’s poem describes a voice like a ‘nightcry’, while in ‘The Quilt’ Abigail Parry maps ‘a worried blot of grey and black/to mark a bruisy year’. In the poem ‘Day, with Hawk’, Vahni Capildeo describes 'An embarrassment of poets. An adoration. An abyss.’

‘all the rooms of our house/Filled up with night.’ says Tracy K. Smith in ‘The Angels’, and in ‘Do You Speak Persian’ Kaveh Akbar writes ‘Right now our moon looks like a pale cabbage rose./ Delam barat tang shodeh./ We are forever folding into the night./ Shab bekheir.’

Richard Scott’s masterpiece ‘Oh My Soho!’ takes us to the late-night Charing Cross ‘black vaults of Heaven’, whereas Danez Smith (and let’s give them the last word) writes in ‘summer, somewhere’: but here, not earth/ not heaven, we can’t recall our white shirts// turned ruby gowns. here, there's no language/ for officer or law, no color to call white.// if snow fell, it’d fall black. please, don’t call/ us dead, call us alive someplace better.