Elowen and the Oak Tree 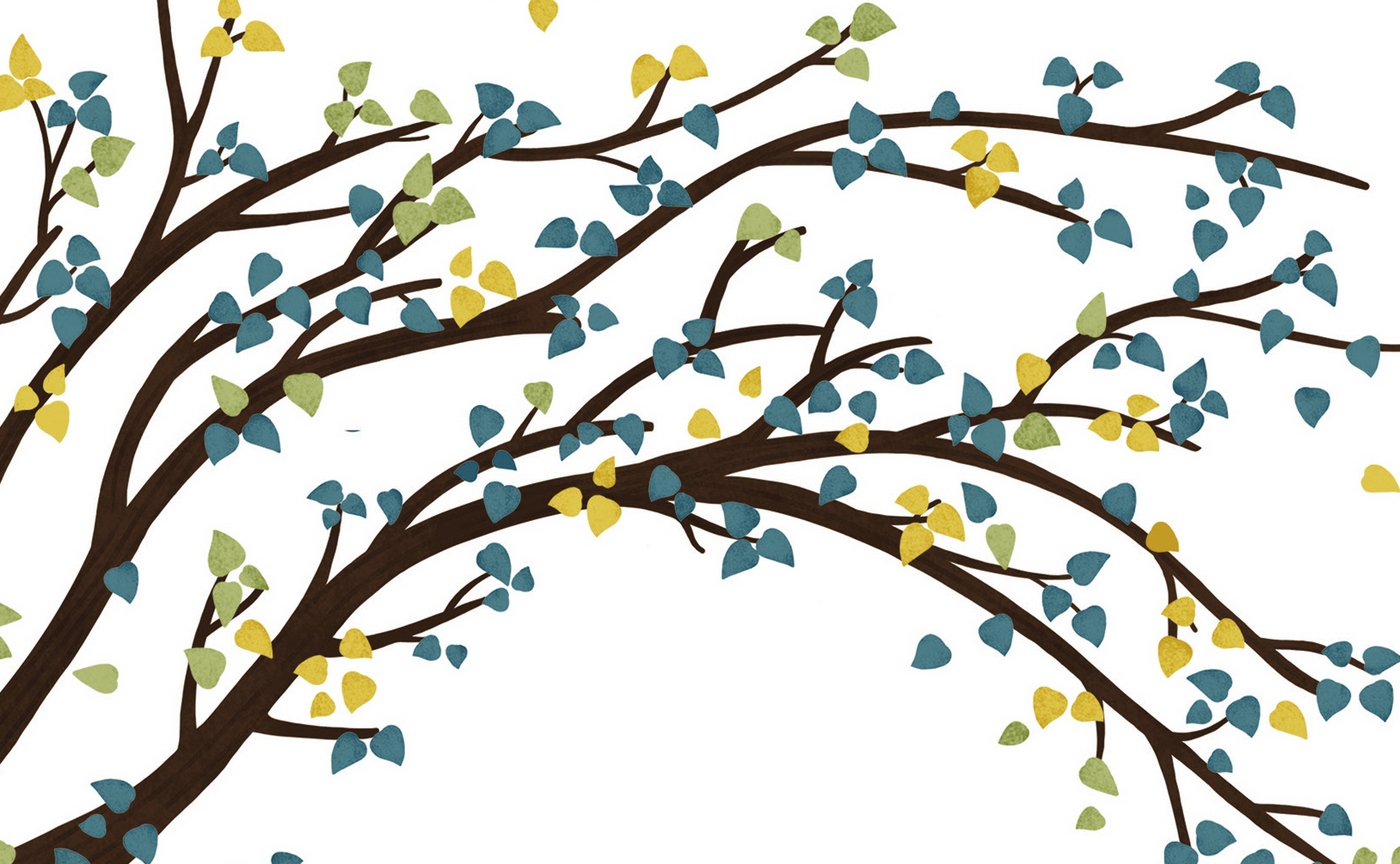 How one tree has helped a father cope with the death of his infant daughter.

She would always kick, dance, every morning with the constancy of the rising sun. That Monday morning, only two days before her due date, there were no kicks, no nudges from inside Amy’s belly. I leant over the bed and called out her name, Elowen, Elowen, Elowen. She would always respond to my voice, her daddy’s resounding voice. We thought she was engaged, perhaps too far down to hear me. Amy played with her belly, prodding and moving it side to side with both hands. I brought Amy a glass of cold water and a bowl of sugary cereal. Still, no movement.

The electrician arrived at eight to install the last of the Beatrix Potter light fittings in Elowen’s nursery and fire-alarm in the hallway. I called Amy’s mum to tell her we were going to the hospital, that our dogs needed looking after as we may be a while. The hospital bag was already packed in our budding anticipation. Maybe this was it, the day we would meet our daughter, bring her home in the swaddle of our deep affection. I was nervous and excited. But as we left home and drove up the motorway, we both descended into stony silence. Amy gazing at her belly, calling Elowen’s name. I put on some music to try rouse her. No response, no flutter, vibration, or kick. I gripped the steering wheel. My knuckles whitened. I felt sick.

In the Day Assessment Unit, a midwife strapped Amy up the CTG machine, then searched for a heartbeat, searched and searched. We were taken through to another room, dimly lit, one bed, a screen. Amy laid back on the bed. I squeezed her left hand with both of my hands. The screen loaded. The sonographer moved the round device over the contours of Amy’s belly, again and again. Then she stopped, and secured the device into a plastic hook besides the screen. She turned to us, took a breath, and said, pronouncing each word with slow and lasting measure, I’m sorry but your baby has died. With a force like no other, our world was destroyed. I watched the screen go black. Our lives were changed forever.

The days before the birth were spent at home. I can hardly recall them except for when Amy sang Elowen’s song to her in the shower, holding her belly with both arms, weeping. We covered all the mirrors in the house with towels. We held one another as though we teetered on the edge of a precipice. I loved Amy more than ever. After a long, induced, and agonising labour, Elowen was born at 1.35 a.m. on 27 July 2017. The room was chillingly absent of our daughter’s first cries. I watched Amy finally fall asleep at 4 a.m., pale and exhausted. I wept into my pillow until dawn. We did not see Elowen until the following evening. I was terrified of seeing our dead daughter.

She took my breath away when I finally did see her, asleep in her cold cot, wondrous and new. I had never beheld such perfect beauty. I even laughed at the sight and touch of her chubby little hands, the wrinkles on her fingers, the finger-nails. I was mesmerised by her feet. I passed my warmth into them as though in an attempt to revive them. I ran my finger across every feature of her delicate face. I cannot find the words to describe that time of utter adoration. She was all that I had been waiting for. It was as though the world had come to rest after ages of turning us toward one another.

Eating properly, drinking water, sleeping, holding onto one another – the basics of getting through the days, the months, the year. And for Amy and I, walking our dogs out onto the heath, into the woods, a loop we walk devotedly every day, was as critical as the basics of survival. We would’ve fallen apart completely if we hadn’t done those walks, breathed the air, held each other beneath the changing skies, and watched our dogs run with the same enthusiasm as they had always done, flushing the skylarks from the heather, sprinting towards us, grinning. Amy’s and my love for each other saved us from collapse.

On the day of Elowen’s cremation, we held our own ceremony. It was too much for us to bear to organise and attend our daughter’s funeral. The image of watching her coffin slide away into concealed flames would’ve killed us. Under a blustery August morning, intermittent shawls of rain sweeping across the heath, and dark clouds massing like towers of the gone night on the horizon broken, now and again, by low beams of light that rolled and spread across the landscape, we sat beneath an oak tree that I had come to cherish over the years, and, especially, in the year of leading up to Elowen’s birth. We made a small pyre of sticks that protected the lit candles from the wind. Wax dripped onto the grass that stayed there for months afterwards.

It was from this oak that I built on an already deep respect and reverence for trees, discovering it in our first week at our new home at the northern edge of the New Forest. I wanted to sleep in its branches, spend hours in its shelter, know it at night as closely as I know my own body. That a tree isn't merely a combination of tissues and chemicals but a presence that plays a part in one’s life as embodied as a person came to the fore. I had to be in contact with it. I began to feel it, not merely register it through the senses or encounter it as an object vaguely connected to its surroundings.

When we found out we were having a girl, it was from this oak that my dreams of adventures with Elowen were gleaned, took root and bloomed. From holding her aloft in its wide saddle at the textured junction where the branches forked and twisted round one another in their crooked journeys to reach out for the weather and sun, climbing up into the leafy lofts of the tree with her, hiding amongst the summer leaves and looking out over the heath as though it were a dad and daughter’s kingdom, all for our taking – the tree would be the centre of our bond. It was from this oak that I garnered the confidence to bring all the love I could muster to fatherhood, to cherish my daughter with every fibre and vein. The whole tree tasseled and ribboned with a father’s dreams. In every sense, a family tree.

It was from this oak tree that I took a green acorn and placed it besides Elowen in the moments of our final goodbye at the Chapel of Rest, closing the white door, hearing the hinges creak, and the rose-scent of the room giving way to the harsh musk of the busy streets outside, the glare and noise of the world, the darkness that consumed us from thereon.

And it is to this oak tree that I return, too, again, and again. To experience this tree gathering my daughter out of the darkness, and back into the world, if only for a momentary gasp of time. The tree brings her in close enough for me to say her name, to brighten my love for her that I’m determined to not let fade. I add another dream-ribbon to its all-accommodating branches. They take their place besides the leaves. My heart brims with joy and, at the same time, is split apart by hurt. The loss and I are carried by the oak tree.

Once, overwhelmed by the harsh light of day, the noises that crowded round me and backed me into corner, the inundation of daytime that filled me with fury, I ran to the tree at night, head torch on, illuminating the driving winter rain, the thick shots of sleet. The shadows soothed me. I said her name again and again, with every step, until I reached the dark tree and held it in the way I held her before I had to leave her forever. My arms ached as though from miles of heavy swimming, the press of her still body trembling in my arms. I held on in the cold rain until midnight as though onto a ship’s mast on a storm-wracked sea. The wind boomed in the bare branches.

The oak tree, in its simplest way, gives me oxygen. My lungs expand, my eyes widen in its environs. It also gives me hope, it gives me the sheltered space for my love for Elowen to be safe, to live, to grieve, to mourn, to celebrate in pain, yes, but nonetheless, to celebrate. I talk freely with her, away from the reticence of people who deny grief, and therefore love. I escape from the cruel and manly pressures to get on with it, an attitude that speaks for a society of mean and compromised hearts.

The oak tree is a refuge, a home for a father’s love and a daughter’s life – no matter how brief, because beauty and truth, in a life of love, does not depend on longevity alone. I witness, at times, the joining of earth and a father’s love for his precious daughter that sings only if I'm quite enough to hear her, and in that joining there is replenishment. To not move on, or move forward, but with the tree as guardian – for Elowen and I to move and grow together, towards the light, through time.

William Henry Searle is the author of ‘Threads: Finding Pattern in the Everyday’, a nature memoir and poetry collection published on Thursday 21 February by Century, Cornerstone (hardback, £16.99)