‘It’s a prison without walls, without roofs – only fences’: The Story of Guantánamo Kid 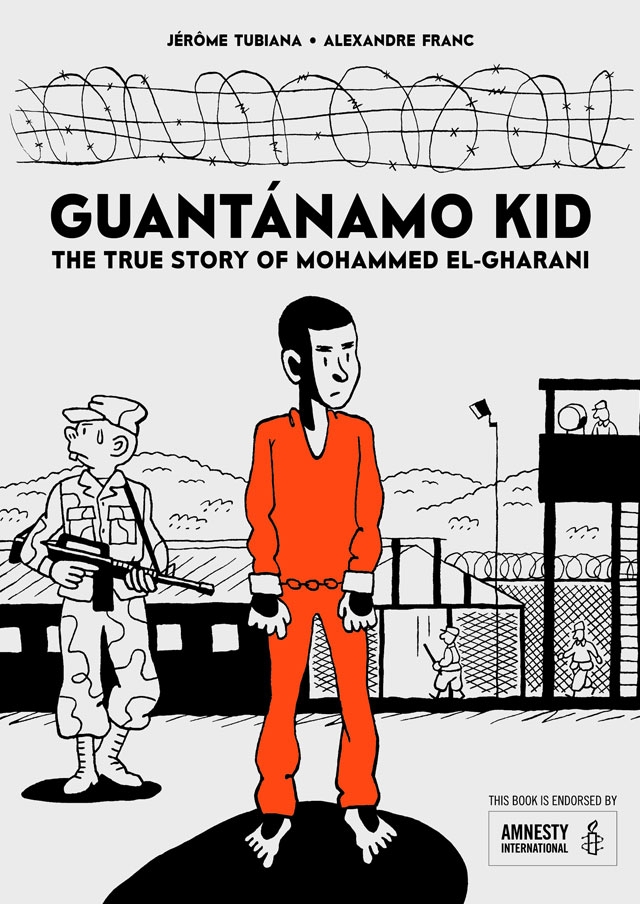 On Tuesday 12 March, Jérôme Tubiana and Alexandre Franc will be at the Bookshop to discuss their graphic novel, Guantánamo Kid, with Jeremy Harding. Guantánamo Kid tells the story of Mohammed El-Gharani, one of the youngest detainees held at Guantánamo Bay. Tubiana first told El-Gharani’s story in a Diary piece for the London Review of Books in 2011:

Then they put us in a plane – I don’t know what kind because I couldn’t see. As soon as you moved or talked, they beat you. They were shouting: IF YOU DON’T FOLLOW OUR ORDERS, WE’LL KILL YOU! I passed out. We had no water and no food. I woke up hearing voices shouting at me in different languages. They took me to my cell. I saw soldiers everywhere, and guns, like if it was war. There were big metal fences everywhere. We were in Guantánamo, in Camp X-Ray. It’s a prison without walls, without roofs – only fences. Nothing to protect you from the sun or the rain.

The sky was blue. Except for sky you couldn’t see anything. Later, when I was moved to Camp Delta, I could look by the windows. The camp was ringed with a green plastic sheet, but there were holes and I could see trees. And even the sea. I saw it even better, years later, when I was moved to Camp Iguana, where they put you before release. Through the plastic sheet, I saw the ocean, big ships and the guards swimming. Only in Iguana can you touch the sand.

In Camp Five as well, there was a window in my cell, but it was covered with brown tape. One day I was sitting, mad, sad, angry, and a woodpecker came and knocked, knocked until it broke the tape – a hole big as a coin. It did this to a lot of windows. It started doing it every day and the guards had to put new tape every day. Sometimes, they left the holes. I could see the cars, the soldiers, the sky, the sun, the life outside.