Some new poetry in translation 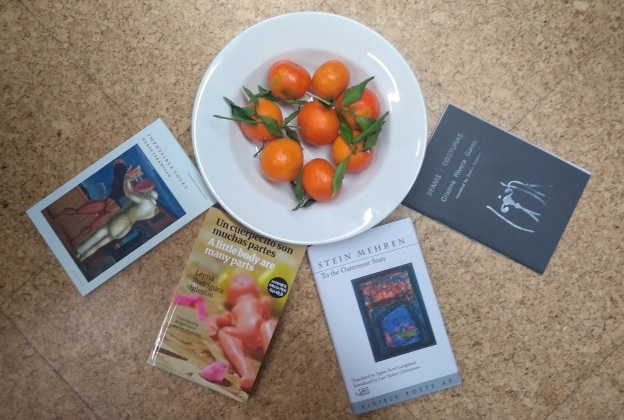 Here's some new poetry in translation I've been enjoying.

Un cuerpecito son muchas partes / A little body are many parts, by Legna Rodríguez Iglesias and translated by Abigail Parry, is one of my favourite books of the year. Highlights include a chorus of luminous pumpkins, an astonishing long sequence plus commentary called 'Miami Century Fox', and a thoroughly helpful poem about fire safety in the workplace. It's hard to imagine a translator more in sympathy with her subject; the knockabout strangeness and the verbal felicity throughout might be from Parry's own (Forward-nominated) work.

Seams : Costuras, by Cristina Rivera Garza and translated by Jessica Sequeira, is a single long poem, available in a very beautiful limited edition of 50 copies, hand-printed by those hardworking types at Girasol Press. It bills itself as 'twenty-four propositions', numbered with subdivisions and sub-subdivisions, a poetry of fine discrimination - 'medallion faith or cultivated faith'. Fans of Maggie Nelson or Susan Howe should get onto this pronto. (Email us on books@lrbshop.co.uk to reserve a copy.)

To the Outermost Stars, by Stein Mehren and translated by Agnes Scott Langeland, is the first appearance in English of this major Norwegian poet. The love poems are vulnerable and moving (and the parallel text reveals that the Norwegian for 'love' is apparently 'kjærlighet', which seems... unwieldy).

Impossible Loves, by Darío Jaramillo and translated by Richard Gwyn, made me sit up when I first read him: 'Testimony Concerning my Brother', a long sequence of poems on nostalgia, and the poems taken from Poems de Amor - a huge popular success in Colombia, whose first poem was voted Colombia's favourite poem in a 1989 TV poll, which gives me a lot of faith in the poetry-reading public of Colombia.