‘Life needs to be struggled for’: Lars Iyer on nihilism in the suburbs 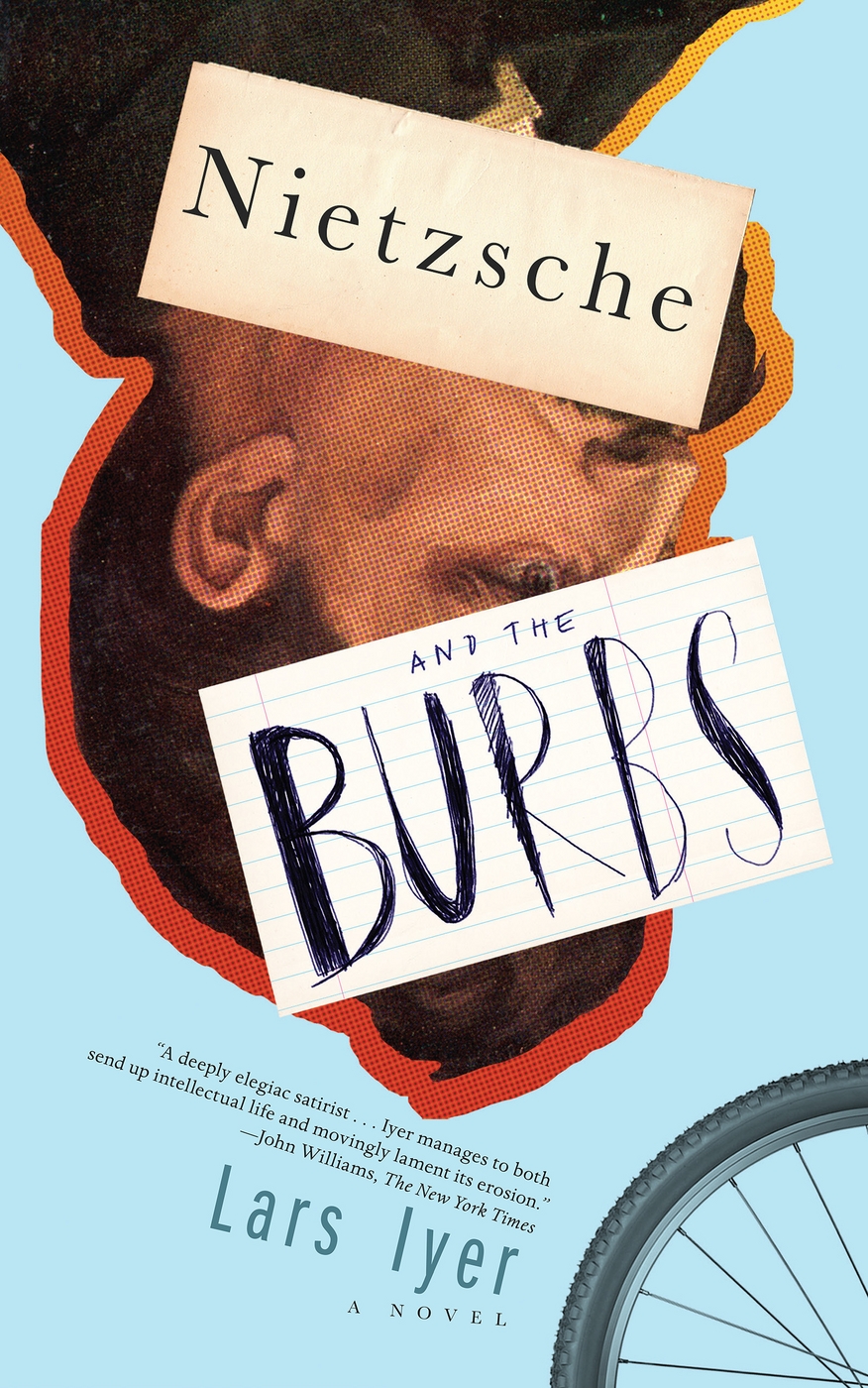 EVENT: Lars Iyer will be in conversation with Jon Day on Tuesday 28 January at 7 p.m. Book tickets here.

The latest in Lars Iyer’s unique series of comic novels of philosophy, Nietzsche and the Burbs, follows a group of suburban sixth formers – among them a silent and brooding private school transferee nicknamed Nietzsche – as they battle the overwhelming ennui of life with sex, drugs, drone metal and nihilist philosophy. But most importantly, it’s a novel set in my hometown of Wokingham; a town whose only literary connection up to this point – and I’m being very generous with my use of the word ‘literary’ here – is that ex-jockey churner-outter of horse-based thrillers Dick Francis used to live there. In celebration of this exciting development in the literary history of Wokingham, I chatted to Lars about suburban sprawl, art and the struggle for meaning.

Growing up in Wokingham, it never occurred to me that someone might want to set a piece of literary fiction there. Why Wokingham?

Wokingham could stand in for so many other towns in the prosperous southeast of England. The old town centre, with its timber-framed cottages and townhouses, the Town Hall with its archways and patterned brick, the Terrace, with its bank of grass is the kind of thing you find on postcards. But it’s only an island in a much larger suburban sprawl, which has been growing since my family moved to the town in the late ‘70s.

Some of the older housing estates are impressive: Scandinavian-style housing set into woodland and green space. But most of the later estates tend to be cramped and crowded; featureless houses fill tiny plots and loom right up to the edge of the road. This sprawl, along with the last bits of woodland, is the setting of my novel.

Wokingham’s a pragmatic town, a town of solutions. It’s successful, wealthy, well-connected, and regularly comes close to the top of the best places to live in the UK. Sure, people complain about the traffic, and house prices are as high as you expect. But the population is prosperous, highly-educated and healthy. There’s plenty of employment in the tech companies that are based around there. And it’s growing more diverse.

But the teens of Nietzsche and the Burbs feel something’s missing. They don’t want to do what they’re supposed to do – work hard, do a vocational course at uni, find a job, settle down. They don’t want what their parents want – the mortgage, the commute. They don’t want to make the suburban adjustment, and accept that this is the only world there can be.

Why Wokingham? Because it’s supposed to provide the solution to life’s problems, but doesn’t, not for my teens at least.

Although it’s lightly fictionalised – an Asda where a Morrisons should be, easily decipherable pseudonymous school names, etc. – it’s an eerily accurate recreation of the town and its sprawl (I was particularly struck by the lengthy digression into Lower Earley). Was your version born from the haze of your own childhood memories, or did you go on a research deep dive? Any little known Wokingham-lore discovered in the archives?

Although I’ve made a few changes, Wokingham and its surroundings are rendered quite faithfully.

I’ve spent some time looking through the archives. I like the stories of the resistance to the coming of business parks and housing estates in the archive of the Wokingham Times. The tenant farmer who said he’d give up his land over his dead body: ‘Men will come with big arms and throw me out, chuck me down the road. I’m only a small man. But their blood will run down Woosehill before I move out of that farm’. The local doctor, waxing lyrical about the green hedges and grassy banks, about wild flowers and birds, about children gathering bluebells, blackberries, chestnuts and flowers, about sledding down the hill in winter. The woman from the Council for the Protection of Rural England, speaking up for the greenwood and the greensward, for the meadowland of the rural arcadia …

There are my childhood memories, too. Moving out of Southall, West London, the Wokingham suburbs were quiet and safe and green. As young children, we could lay out our soft toys in a circle on the grass of our front garden, set snails slithering across the road, make bedsheet camps in our back garden to stay the night in. Later, we’d look for slow-worms under rotten wood, kneel by ponds with our nets, bring home frogspawn and watch tadpoles sprout legs.

But as we grew older, we tired of cycling through the housing estates, one after another. We’d make vandals’ trips to the new housing estates being built. We drank Thunderbird wine in the woods, pushing the cork down with a branch. We all but blew out our eardrums listening to loud music.

Wokingham might not have made it into many (any?) works of fiction before now, but the literature of suburbia is a well-ploughed furrow (or some less unsuitably rural version of that metaphor). Are you a fan of suburban literature (and films and art more generally)? Which novels informed or inspired your treatment of the setting?

I’m told that Dick Francis, the racing horse writer, was brought up in the town, and has included it in his fiction. Isaac Deutscher wrote part of his biography of Trotsky living there in the ‘50s. Away from Wokingham, Alexander Pope lived in Binfield, Charles Kingsley in Eversley, Mary Russell Mitford in Shinfield – but they don’t count.

I don’t know much suburban literature. I’ve never been drawn to it. Suburban art: definitely, if it means George Shaw’s paintings, for which I have great admiration. Shaw shows us another kind of experience of the sameness of the suburbs, in a manner analogous to what my character Nietzsche writes about in his blogs on Wokingham life. A kind of mysticism of the suburbs: that’s what Nietzsche discovers. A theme very close to my heart …

Suburban music, music about the suburbs by bands that escaped the suburbs: yes to that, too. Music was our obsession when I was young. It was the only subject we’d talk about intellectually. We’d buy the music papers, the NME and so on, where music was life and death. Music felt for us – that’s how I’d put it. It was ecstatic for us. It was spiritual for us. It was angry for us. It was tender for us. Music believed for us, too. We listened to receive clues for living a bearable life, for ways of not being dead …

I wanted to write a novel that expressed the same ardent struggle to live. The question was how I might find a prose-style, a novel-writing technique that could convey this. Reviewing Nietzsche and the Burbs, Steve Mitchelmore asks us to imagine all the novels published in the past twenty years as a kind of suburb:

You wander through the streets imagining the lives of people in their rooms, what goes on behind their windows. Some look welcoming, others forbidding, but mostly indistinct, just rows and rows of near identical terraces. We speak of the death of the novel even as new estates pop up, too many to explore by foot, so we rely on drone footage to confirm that, yes, they're all the same, more or less. It is a kind of death, but one we struggle to recognise.

He is kind enough to suggest that my novel is able to find a clearing in the suburbs, neither part of the suburbs nor apart from them.

It’s a very funny book, and it’s easy to laugh at the dramatic ennui of sixth formers, but there’s also a real tenderness for these precocious idiots. In our age of school climate strikes and ‘youthquakes’, do we need to give the youth more respect? Should we let the children lead the way, even when they’re making unlistenable drone metal?

Thanks. I am a devotee of comedy in fiction, of lightness. I wanted the reader to laugh with, not at, the characters, however ridiculous they might seem. I love their intensity, their unreasonable demands. I love their passionate rejection of ordinary life, or their desire to embrace that ordinariness in another way.

Teenagers are often patronized, I think. But they understand what adults often do not: that you shouldn’t just give in to the order of things; that you need to struggle to make meaning – to resist the values that tell you to live like everyone else, and that to fail to do so makes you abnormal. Life needs to be struggled for.

You’ve transplanted Wittgenstein to the Senior Common Room in Cambridge, and now Nietzsche to the sixth form common room in Wokingham – who and where next?

Wittgenstein Jr and Nietzsche and the Burbs are the first two parts of a thematic trilogy. There are no overlapping characters, or continuity between the novels, but each one is set in the present and patterned on the life and thought of a philosopher. The working title of the next novel is Simone Weil, and is set in contemporary Manchester, among PhD students at a fictional new university. After the Philosophers trilogy, something else entirely …

Nietzsche and the Burbs by Lars Iyer is published on 9 January by Melville House.