‘An Unexplored Hinterland’: Ed Caesar in conversation about ‘The Moth and the Mountain’

We were sad not to be able to welcome Ed Caesar to talk about his new book ‘The Moth and the Mountain’ with Andrew O’Hagan on Tuesday 17 November – but delighted that we can instead bring you this conversation between Ed and his editor, Tom Killingbeck, about the book and why Ed felt compelled to write it.

Tom Killingbeck: Since his death, Maurice Wilson’s name has most often appeared as a whimsical tangent or footnote in histories of Everest, often alongside the words ‘eccentric’ or ‘doomed’. How did you first come across Wilson’s story, and what made you think it was worth further investigation?

Ed Caesar: I first read about Wilson in Wade Davis’s magnificent book, Into the Silence, which was published in 2011. Davis doesn’t describe Wilson’s story in much detail, but even the outline of his tale is fascinating. Yes, Wilson failed. But so did George Mallory, the alpinist who died on Everest in 1924, and there are hundreds of books about him. Failure is always much more interesting than success. Wilson’s failure was grandiose and heartbreaking.

I also had a sense that there was much more to say about Wilson – that he had an unexplored hinterland. Most of the climbers on the 1920s expeditions to Everest had served in the First World War. For them, climbing Everest had become a means of redemption. I knew Wilson had fought bravely in the First World War, and I wondered how that experience had informed his later adventures. I was particularly caught by one line in Dennis Roberts’s book about Wilson. He wrote that Wilson’s service in the First World War had affected him ‘no more and no less’ than any other ‘sensitive and brave’ young man. I knew that assertion must be incomplete, if not wrong entirely. In Wilson’s diary, which is held at the Alpine Club, he reflects on his wartime service while he is at the foot of Everest, sixteen years after he won his Military Cross for valour.

TK: The question as to why Wilson gripped you in that way is an interesting one. In a recent New Yorker piece you write about your father, a pilot. In fact, you discovered that your father’s first naval-training flight had been in a Tiger Moth – the titular plane Wilson flew to Nepal – long after you’d started writing the book. You also say that if your father hadn’t died young, it would be ‘unlikely that I would have spent a large part of my thirties writing a book about a traumatised aviator whose heart’s desire was to climb Everest.’ This book was obviously very personal to you on some level, but how conscious was that as you started to write, and how do you think it informed the way you pieced together Wilson’s story?

EC: I’m not sure writers know why a subject or a story has gripped them. The Orwell line seems appropriate here: ‘Writing a book is a horrible, exhausting struggle, like a long bout with some painful illness. One would never undertake such a thing if one were not driven on by some demon whom one can neither resist nor understand.’ In my case, Orwell was very nearly right. Wilson just would not let go of me, and I didn’t know why for a long time.

It really wasn’t until I'd written the final version of the book that the penny dropped. My family history certainly had something to do with it. My dad was a pilot, and he died in an accident when I was two years old. As I wrote in that New Yorker piece you referenced, I often used to stare at a framed poem called ‘High Flight’ that stood on the piano next to a photo of my dad. The poem is a paean to flying. When I was little, I connected flight with freedom, bravery, and masculinity, but also to this terrible thing that had happened in our family. I suppose I was working through some of these themes – the price of adventure, the nature of masculinity, and so on – when I became interested in Wilson.

And yes, you’re right. My dad’s first ever training flight was in a Tiger Moth. I didn’t discover that until 2018, when the research for the book was nearly done. It was a happy and resonant moment for me: it felt as if I’d completed some kind of psychic journey.

TK: I can see that! And I suppose you went on another psychic journey in trying to put the puzzle pieces of Wilson together – he seems rather chameleonic. War hero, Jazz Age dilettante, mystic, self-publicist, mountaineer. And while he writes diaries and letters at various points in his life, there are gaps in his story – a particularly lost member of the Lost Generation, his post-war travels in the book take him from London to the United States to New Zealand, all the while starting up new lives and seeming to get bored of them. I imagine that made him a difficult subject to pin down on the page. How did you find your way around those challenges, and what was that process like? And, now complete, do you think of the book as a ‘biography’ in the traditional sense?

EC: You’re right, Wilson had a wild and peripatetic life, and he was difficult to pin down. The process was fun, though. When I started thinking about Wilson as a subject of a book, I had some major sources to rely on: there was his diary, held at the Alpine Club, which details his trek to Everest and his climb. There were newspaper reports. There were Wilson’s wartime service records, held at the National Archives, and the records of the civil servants who tried to stop Wilson’s flight to India, which were held at the India Office archive in the British Library. And there was Dennis Roberts’s 1957 book, I'll Climb Mount Everest Alone – which was, I soon came to understand, a problematic document, full of errors and omissions.

Over five years, I was able to track down some excellent material. In particular, I was lent 21 of Wilson’s letters by Peter Meier-Hüsing, a genial German journalist who has written about Wilson. The letters are rich and wonderful, and you get a real sense of Wilson’s voice. They’d never been published in English before. It was also important for me to understand what had happened to Wilson during the First World War. With the help of his commanding officers’ diaries – and some invaluable guidance from John Sheehan, a historian who wrote a brilliant history of Wilson’s battalion – I was able to piece Wilson’s service together. The story that emerged was far different from the one that had previously been told about Wilson. I was particularly interested in the wartime story of Wilson’s older brother, Victor, who fought at the two battles of Bullecourt in 1917, and who returned home a diagnosed neurasthenic, beset by nightmares. And then, there were hundreds of other historical clues that I dug out: records in New Zealand, Canada, America, and Africa. It is such a kick to find your man’s name on a ships’ manifest in Mozambique.

Despite all this work, there were times when Wilson disappeared from my view – when no records existed, and no amount of labour would unearth any more clues. As an author, it can be hard to know what to do with such lacunae. Biographies are supposed to be definitive. It took me a long time to work out how to approach the gaps in Wilson’s story, but when I wrote the final draft of the book, I had a breakthrough. I resolved to be honest about when I didn’t know something, rather than write around the problem. I also wrote a chapter near the beginning of the book, which digs into some of these historiographical problems, which was about the riskiest thing I’ve ever done as a writer. (I hope/think/pray that section works! Perhaps you could put my mind at ease, Tom.)

To answer your question: The Moth and the Mountain is in one sense a traditional biography. Large sections of it are chronological. But it also allows for the fact that people are confounding – Wilson, perhaps, especially so. I hope that the book also has something interesting to say about the act of biography, and what a weird thing it is to write about a long-dead person as if you knew them as a friend.

TK: I can see why you felt that chapter was risky – you break the fourth wall and use the second person to acknowledge to the reader the impossibilities of telling Wilson’s story definitively, which is an unusual admission for a biographer. While it might be a little divisive, I found it an original and thought-provoking way of tackling the confounding nature of your subject, and indeed the act of biography itself. I get the sense that, more than to tell his story as completely as possible, your primary drive was to rescue Wilson in some way, and change his place in the history books. Is that right, and how do you hope your book will change the narrative around Wilson and what he did?

EC: Ha – I’m pleased you think it works, because the time to raise editorial objections has slipped by. And yes: this entire book was an act of rescue. I wanted Wilson to be viewed as more than an oddball, which has been his fate for 85 years. His story is about indomitability as much as it is about eccentricity. He can be a difficult man to love at times. His behaviour towards women in particular is unforgivable. But he also suffered manifold heartbreaks, and his trauma was profound. His mission to Everest was a wildly expressive way of addressing the pain in his life. I hope readers encounter a complicated hero, rather than a laughable eccentric. I hope they feel as moved by his life and adventures as I was.

‘The Moth and the Mountain’ is published by Penguin, priced £18.99. 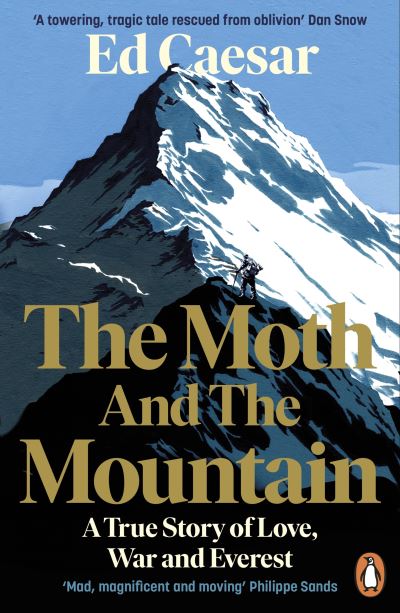 The Moth and the Mountain