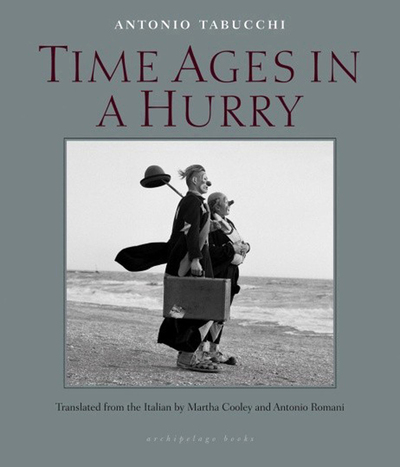 Time Ages In A Hurry

As the collection’s title suggests, time’s passage is the fil rouge of these stories.  All of Tabucchi’s characters struggle to find routes of escape from a present that is hard to bear, and from places in which political events have had deeply personal ramifications for their own lives.

Each of the nine stories in Time Ages in a Hurry is an imaginative inquiry into something hidden or disguised, which can be uncovered not by reason but only by feeling and intuition, by what isn’t said. Disquieted and disoriented yet utterly human in their loves and fears, the characters in these vibrant and often playful stories suffer from what Tabucchi once referred to as a “corrupted relationship with history.” Each protagonist must confront phantoms from the past, misguided or false beliefs, and the deepest puzzles of identity–and each in his or her own way ends up experiencing “an infinite sense of liberation, as when finally we understand something we’d known all along and didn’t want to know.”

“This splendid collection of stories by Antonio Tabucchi, one of Italy’s most original and admired writers, is a delight to read.  Tabucchi’s fertile and offbeat imagination ranges over a broad spectrum of themes—family, aging, war, travel—always approached obliquely, teasing, engaging, and above all rewarding the reader.  The translation by Martha Cooley and Antonio Romani is acutely sensitive to the rhythms of Tabucchi’s fluid sentences and the uncanny nature of his sensibility.” — Lynn Sharon Schwartz

“Tabucchi’s prose creates a deep, near-profound and sometimes heart-wrenching nostalgia and constantly evokes the pain of recognizing the speed of life’s passing which everyone knows but few have the strength to accept … Wonderfully thought-provoking and beautiful.” — Alan Cheuse, NPR’s All Things Considered