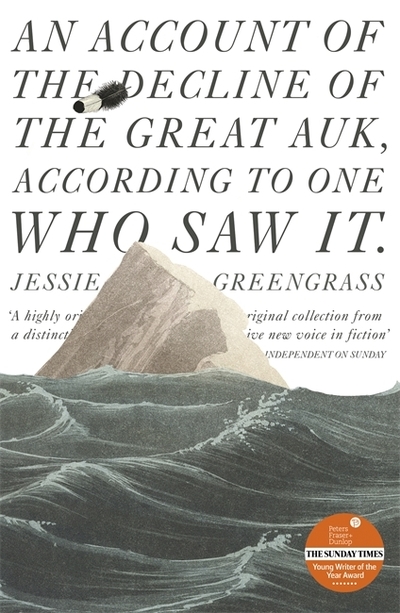 An Account of the Decline of the Great Auk, According to One Who Saw It

Recommended by Gayle
‘A debut collection that lives up to the promise of its marvellous title. Ranging widely in time and place, these stories can be strange, unsettling or funny - but they’re all brilliant.’

WINNER OF THE EDGE HILL SHORT STORY PRIZE 2016SHORTLISTED FOR THE SUNDAY TIMES/PFD YOUNG WRITER OF THE YEAR AWARD 2016'Greengrass is undoubtedly that rare thing, a genuinely new and assured voice in prose. Her work is precise, properly moving, quirky and heartfelt' A. L. KennedyThe twelve stories in this startling collection range over centuries and across the world.There are stories about those who are lonely, or estranged, or out of time. There are hauntings, both literal and metaphorical; and acts of cruelty and neglect but also of penance.Some stories concern themselves with the present, and the mundane circumstances in which people find themselves: a woman who feels stuck in her life imagines herself in different jobs - as a lighthouse keeper in Wales, or as a guard against polar bears in a research station in the Arctic.Some stories concern themselves with the past: a sixteenth-century alchemist and doctor, whose arrogance blinds him to people's dissatisfaction with their lives until he experiences it himself.Finally, in the title story, a sailor gives his account - violent, occasionally funny and certainly tragic - of the decline of the Great Auk.