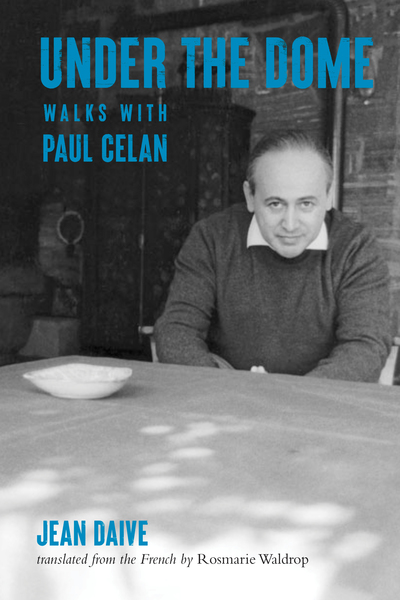 An arresting memoir of the final years and tragic suicide of one of twentieth-century Europe's greatest poets, published on the centenary of his birth. "Daive's memoir sensitively conjures a portrait of a man tormented by both his mind and his medical treatment but who nonetheless remained a generous friend and a poet for whom writing was a matter of life and death."-The New Yorker "Jean Daive's memoir of his brief but intense spell as confidant and poetic confrere of Paul Celan offers us unique access to the mind and personality of one of the great poets of the dark twentieth century."-J.M. Coetzee Paul Celan (1920-1970) is considered one of Europe's greatest post-World-War II poets, known for his astonishing experiments in poetic form, expression, and address. Under the Dome is French poet Jean Daive's haunting memoir of his friendship with Celan, a precise yet elliptical account of their daily meetings, discussions, and walks through Paris, a routine that ended suddenly when Celan committed suicide by drowning himself in the Seine. Daive's grief at the loss of his friend finds expression in Under the Dome, where we are given an intimate insight into Celan's last years, at the height of his poetic powers, and as he approached the moment when he would succumb to the debilitating emotional pain of a Holocaust survivor. In Under the Dome, Jean Daive illuminates Celan's process of thinking about poetry, grappling with questions of where it comes from and what it does: invaluable insights about poetry's relation to history and ethics, and how poems offer pathways into a deeper grasp of our past and present. This new edition of Rosmarie Waldrop's masterful translation includes an introduction by scholars Robert Kaufman and Philip Gerard, which provides critical, historical, and cultural context for Daive's enigmatic, timeless text. "Under the Dome breathes with Celan while walking with Celan, walking in the dark and the light with Celan, invoking the stillness, the silence, of the breathturn while speaking for the deeply human necessity of poetry."-Michael Palmer, author of The Laughter of the Sphinx "The fragments textured together in this more-than-magnificent rendering of Jean Daive's prose poem by this master of the word, Rosmarie Waldrop, grab on and leave us haunted and speechless."-Mary Ann Caws, author of Creative Gatherings: Meeting Places of Modernism and editor of the Yale Anthology of Twentieth Century French Poetry "Rosmarie Waldrop's brilliant translation resonates with her profound knowledge of both Celan's and Daive's poetry and the passion for language that she shares with them. The text brings these three major poets together in a highly unusual and wholly successful collaboration."-Cole Swensen, author of On Walking On "Rosmarie Waldrop takes up Celan's question to Jean Daive as her own. I cannot unread her inimitable ease in these pages. This is a book that contends with time."-Fady Joudah, author of Footnotes in the Order of Disappearance "Daive's writing is a highly punctuated recollection, a memoir, perhaps a testimony, but also surely a way of attending to the time of the writing, the conditions and coordinates of Celan's various enunciations, his linguistic humility. ... Celan's death, what Daive calls 'really unforeseeable,' remains as an 'undercurrent' in the conversations recollected here, gathered up again, with an insistence and clarity of true mourning and acknowledgement."-Judith Butler, author of The Force of Nonviolence