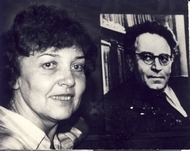 Robert Chandler came to the London Review Bookshop to discuss his recent translation of Vassily Grossman's Everything Flows - a work even more critical of Soviet society than Life and Fate - with the author's daughter, Yekaterina Korotkova-Grossman. After speaking of her memories of her father and of her first reading of his work, Korotkova-Grossman talked about her memoir Ukraine: On the Edge of an Empire Life, which describes the years in Lvov immediately after the Second World War when the entire city was, in a sense, deported to the Soviet Union.