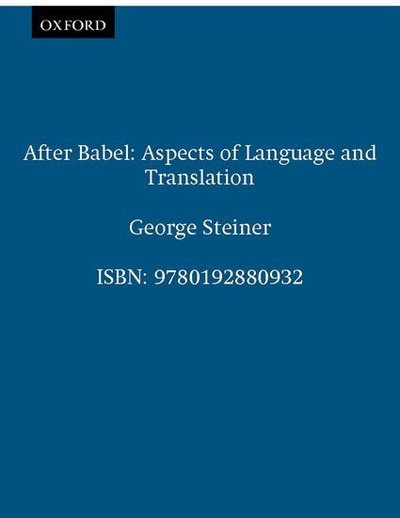 `Translation has long needed a champion, and at last in George Steiner it has found a scholar who is a match for the task.' Sunday Times First published in 1975, After Babel constituted the first systematic investigation of the theory and processes of translation since the eighteenth century. In mapping out its own field, it quickly established itself as both controversial and seminal, and gave rise to a considerable, and still-growing, body of secondary literature. Even today, with its status as a modern classic beyond question, many of the books insights remain provocative and challenging. For the second edition of After Babel, George Steiner entirely revised the text, added new and expanded notes, provided a substantially updated bibliography (including much Russian and Eastern European material), and wrote a new preface setting the book in the present context of hermeneutics, poetics, and translation studies. `Steiner's subject is extravagantly rich and he ponders it on the most generous scale...his language and his ideas display even-handedness, seriousness without heaviness, learning without pedantry, and sober charm.' New Yorker