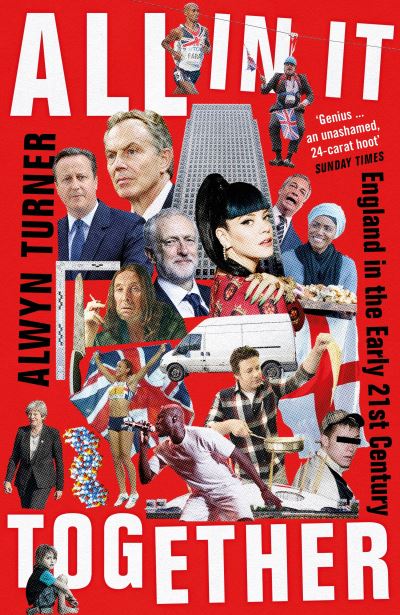 All In It Together

'He writes with a tremendous sense of fun. The result is a rare thing: not just a serious work of contemporary history, but an unashamed, 24-carat hoot' - Dominic Sandbrook, Sunday Times 'Up there with the best ... Reading it is almost like an out-of-body experience' - Craig Brown, Mail on Sunday Perhaps the Brexit vote shouldn't have come as such a shock. In Cool Britannia's long hangover, every pillar of British society seemed to sink into a mire of its own making, from the Church to the banks to the great offices of state. Even the BBC lost its reassuring dignity (though the private schools were doing rather well: their former pupils were everywhere). We were losing our faith in the system. How did it come to this? Weaving politics and popular culture into a mesmerising tapestry, historian Alwyn Turner tells the definitive story of the Blair, Brown and Cameron years. Some details may trigger a laugh of recognition (the spectre of bird flu; the electoral machinations of Robert Kilroy-Silk). Others are so surreal you could be forgiven for blocking them out first time around (did Peter Mandelson really enlist a Candomble witch doctor to curse Gordon Brown's press secretary?). The deepest patterns, however, only reveal themselves at a certain distance. Through the Iraq War and the 2008 crash, the rebirth of light entertainment and the rise of the 'problematic', Turner shows how the crisis in the soul of a nation played out in its daily dramas and nightly distractions.