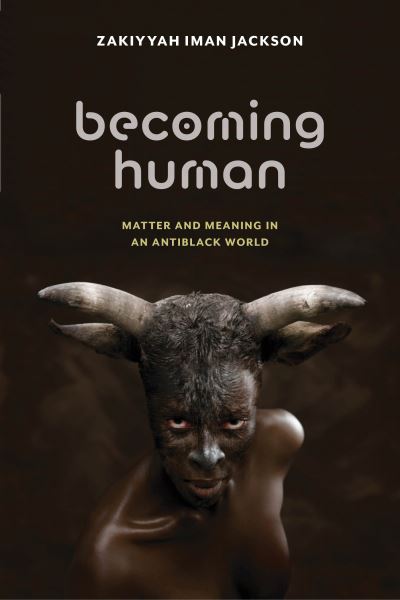 Argues that blackness disrupts our essential ideas of race, gender, and, ultimately, the human

Rewriting the pernicious, enduring relationship between blackness and animality in the history of Western science and philosophy, Becoming Human: Matter and Meaning in an Antiblack World breaks open the rancorous debate between black critical theory and posthumanism. Through the cultural terrain of literature by Toni Morrison, Nalo Hopkinson, Audre Lorde, and Octavia Butler, the art of Wangechi Mutu and Ezrom Legae, and the oratory of Frederick Douglass, Zakiyyah Iman Jackson both critiques and displaces the racial logic that has dominated scientific thought since the Enlightenment. In so doing, Becoming Human demonstrates that the history of racialized gender and maternity, specifically antiblackness, is indispensable to future thought on matter, materiality, animality, and posthumanism.

Jackson argues that African diasporic cultural production alters the meaning of being human and engages in imaginative practices of world-building against a history of the bestialization and thingification of blackness-the process of imagining the black person as an empty vessel, a non-being, an ontological zero-and the violent imposition of colonial myths of racial hierarchy. She creatively responds to the animalization of blackness by generating alternative frameworks of thought and relationality that not only disrupt the racialization of the human/animal distinction found in Western science and philosophy but also challenge the epistemic and material terms under which the specter of animal life acquires its authority. What emerges is a radically unruly sense of a being, knowing, feeling existence: one that necessarily ruptures the foundations of "the human."