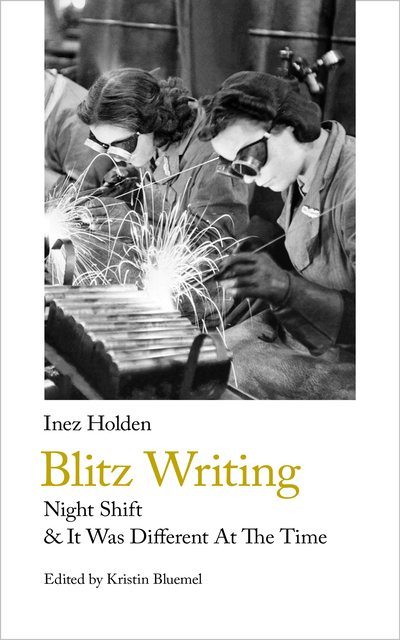 Emerging out of the 1940-1941 London Blitz, the drama of these two short works, a novel and a memoir, comes from the courage and endurance of ordinary people met in the factories, streets and lodging houses of a city under bombardment. Inez Holden's novella Night Shift follows a largely working-class cast of characters for five night shifts in a factory that produces camera parts for war planes. It Was Different At The Time is Holden's account of wartime life from April 1938 to August 1941, drawn from her own diary. This was intended to be a joint project written with her friend George Orwell (he was in the end too busy to contribute), and includes disguised appearances of Orwell and other notable literary figures of the period. The experiences recorded in It Was Different At The Time overlap in period and subject with Night Shift, setting up a vibrant dialogue between the two texts. Inez Holden (1903-1974) was a British writer and literary figure whose social and professional connections embraced most of London's literary and artistic life. She modelled for Augustus John, worked alongside Evelyn Waugh, and had close relationships with George Orwell, Stevie Smith, H G Wells, Cyril Connolly, and Anthony Powell. The introduction and notes are by Kristin Bluemel, exploring how these short prose texts work as multiple stories: of Inez Holden herself, the history of the Blitz, of middlebrow women's writing, of Second World War fiction, and of the world of work.