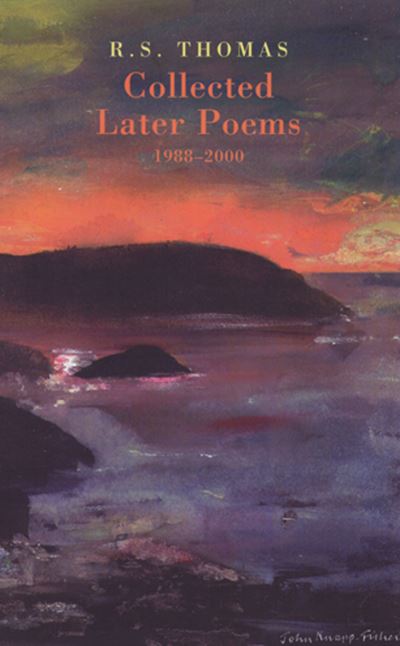 R.S. Thomas (1913-2000) is one of the major poets of our time, as well as one of the finest religious poets in the English language and Wales's greatest poet. This substantial gathering of his late poems shows us the final flowering of a truly great poet still writing at the height of his powers right through his 70s and 80s. It begins with his autobiographical sequence The Echoes Return Slow, which has been unavailable for many years, and goes up to Residues, written immediately before his death at the age of 87. These powerful poems - about time and history, the self, love, the machine, the Cross and prayer - cover all of his major areas of questioning. This is R.S. Thomas in a winter light, his fury concentrated on the inhumanity of man and modern technology, his gaze absorbed by the God he felt in Nature, but finding nourishment in 'waste places'. At the same time he writes with resigned feeling and immense insight, as well as grim humour and playful irony, of isolation, ageing, marriage and 'love's shining greenhouses'. For Thomas, 'Poetry is that / which arrives at the intellect / by way of the heart.' Collected Later Poems 1988-2000 is the sequel to R.S. Thomas's Collected Poems 1945-1990 (Dent, 1993; Phoenix Press, 1995), which only covers his collections up to Experimenting with an Amen (1986). It reprints in full the contents of R.S. Thomas's last five collections, The Echoes Return Slow (Macmillan, 1988: unavailable for many years), and Bloodaxe's Counterpoint (1990), Mass for Hard Times (1992), No Truce with the Furies (1995) and the posthumously published Residues (2002). It was a Poetry Book Society Recommendation. It was followed in 2013 by Uncollected Poems and in 2016 by Too Brave to Dream.