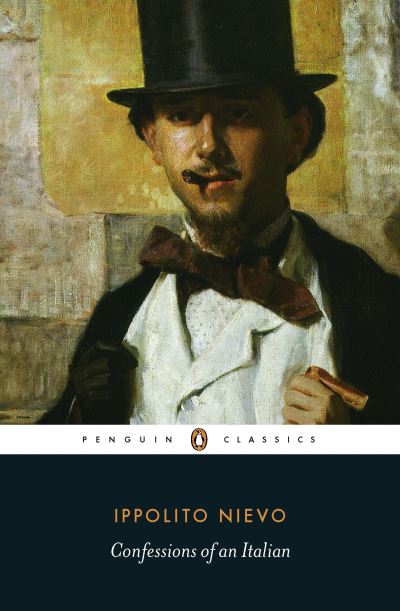 Confessions of an Italian

An overlooked classic of Italian literature, this epic and unforgettable novel recounts one man's long and turbulent life in revolutionary Italy.

At the age of eighty-three and nearing death, Carlo Altoviti has decided to write down the confessions of his long life. He remembers everything: his unhappy childhood in the kitchens of the Castle of Fratta; romantic entanglements during the siege of Genoa; revolutionary fighting in Naples; and so much more. Throughout, Carlo lives only for his twin passions in life: his dream of a unified, free Italy and his undying love for the magnificent but inconstant Pisana. Peopled by a host of unforgettable characters - including drunken smugglers, saintly nuns, scheming priests, Napoleon and Lord Byron - this is an epic historical novel that tells the remarkable and inseparable stories of one man's life and the history of Italy's unification.

Ippolito Nievo was born in 1831 in Padua. Confessions of an Italian, written in 1858 and published posthumously in 1867, is his best known work. A patriot and a republican, he took part with Garibaldi and his Thousand in the momentous 1860 landing in Sicily to free the south from Bourbon rule. Nievo died before he reached the age of thirty, when his ship, en route from Palermo to Naples, went down in the Tyrrhenian Sea in early 1861. He was, Italo Calvino once said, the sole Italian novelist of the nineteenth century in the 'daredevil, swashbuckler, rambler' mould so dear to other European literatures.

Frederika Randall has worked as a cultural journalist for many years. Her previous translations include Luigi Meneghello's Deliver Us and Ottavio Cappellani's Sicilian Tragedee and Sergio Luzzatto's Padre Pio: Miracles and Politics in a Secular Age.

Lucy Riall is Professor of Comparative History at the European University Institute. Her many books include Garibaldi. Invention of a Hero.

'Of all the furore that came out of the Risorgimento, only Manzoni and Nievo really matter today' - Umberto Eco

'A spirited appeal for liberte, egalite and fraternite, the novel is also an astute, scathing and amusing human comedy, a tale of love, sex and betrayal, of great wealth and grinding poverty, of absolute power and scheming submission, of idealism and cynicism, courage and villainy' - The Literary Encyclopedia