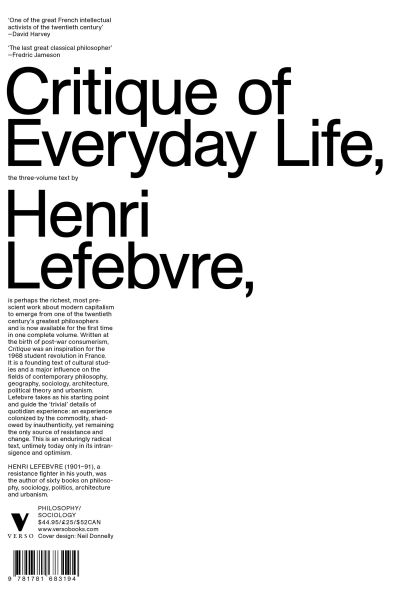 The three-volume text by Henri Lefebvre is perhaps the richest, most prescient work about modern capitalism to emerge from one of the twentieth century's greatest philosophers and is now available for the first time in one complete volume. Written at the birth of post-war consumerism, Critique was an inspiration for the 1968 student revolution in France. It is a founding text of cultural studies and a major influence on the fields of contemporary philosophy, geography, sociology, architecture, political theory and urbanism. Lefebvre takes as his starting point and guide the 'trivial' details of quotidian experience: an experience colonized by the commodity, shadowed by inauthenticity, yet remaining the only source of resistance and change. This is an enduringly radical text, untimely today only in its intransigence and optimism.