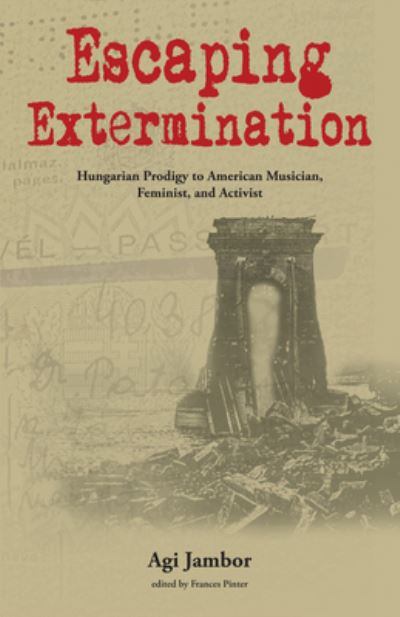 Written shortly after the close of World War II, Escaping Extermination tells the poignant story of war, survival, and rebirth for a young, already acclaimed, Jewish Hungarian concert pianist, Agi Jambor. From the hell that was the siege of Budapest to a fresh start in America. Agi Jambor describes how she and her husband escaped the extermination of Hungary's Jews through a combination of luck and wit. As a child prodigy studying with the great musicians of Budapest and Berlin before the war, Agi played piano duets with Albert Einstein and won a prize in the 1937 International Chopin Piano Competition. Trapped with her husband, prominent physicist Imre Patai, after the Nazis overran Holland, they returned to the illusory safety of Hungary just before the roundup of Jews to be sent to Auschwitz was about to begin. Agi participated in the Resistance, often dressed as a prostitute in seductive clothes and heavy makeup, calling herself Maryushka. Under constant threat by the Gestapo and Hungarian collaborators, the couple was forced out of their flat after Agi gave birth to a baby who survived only a few days. They avoided arrest by seeking refuge in dwellings of friendly Hungarians, while knowing betrayal could come at any moment. Facing starvation, they saw the war end while crouching in a cellar with freezing water up to their knees.After moving to America in 1947, Agi made a brilliant new career as a musician, feminist, political activist, professor, and role model for the younger generation. She played for President Harry Truman in the White House, performed with the Philadelphia Orchestra, and became a recording artist with Capitol Records. Unpublished until now but written in the immediacy of the horrors of World War II and the Holocaust, Escaping Extermination is a story of hope, resilience, and even humor in the fight against evil.