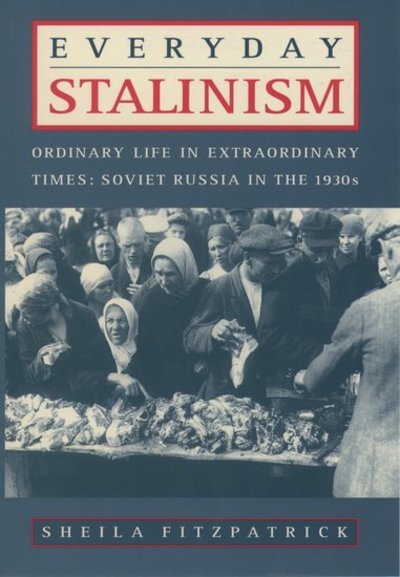 Here is a pioneeering account of everyday life under Stalin, written by one of our foremost authorities on modern Russain history. Focusing on urban areas in the 1930's, Sheila Fitzpatrick shows that with the adoption of collectivisation and the first Five Year Plan, everyday life was utterly transformed. with the abolition of the market, shortages of food, clothing, and all kinds of consumer goods became endemic. As peasants fled the collectivised villages, major cities were soon in the grip of a major housing crisis, with families jammed for decades into tiny single rooms in communal appartments, counting living space in square metres. It was a world of overcrowding, privation, endless queues, and broken families, in which the regime's promise of future socialist abundance rand hollowly. We read of a government bureaucracy that often turned everyday life into a nightmare, and of the ways that ordinary citizens tried to circumvent it, primarily by patronage and the ubiquitous system of personal connections known as "blat". And we read of the police surveillance that was endemic to this society, and the waves of terror like the Great Purges of 1937, that periodically cast this world into turmoil. Fitzpatrick illuminates the ways that Soviet city-dwellers coped with this world, examining such diverse activities as shoppping, travelling, telling jokes, finding an apartment, getting an education, cultivating patrons and connections, marrying and raising a family, writing complaints and denunciations, voting, and trying to steer clear of the secret police. Based on extensive research in the Soviet archives only recently opened to historians, this superb book illuminates the ways ordinary people tried to live normal lives under extraordinary circumstances.