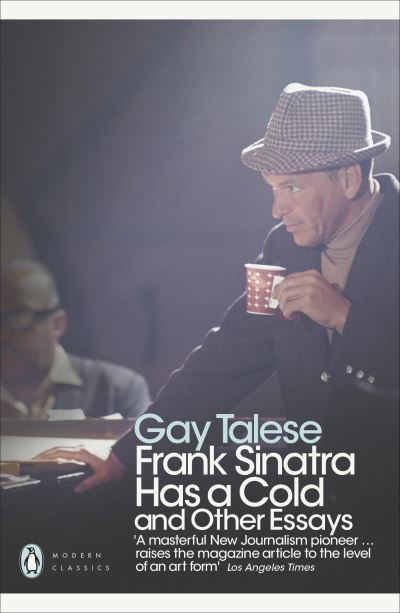 Frank Sinatra Has a Cold

A selection of witty and provocative essays from the father of New Journalism, Gay Talese's Frank Sinatra Has a Cold and Other Essays is published in Penguin Modern Classics.

Gay Talese is the father of American New Journalism, who transformed traditional reportage with his vivid scene-setting, sharp observation and rich storytelling. His 1966 piece for Esquire, one of the most celebrated magazine articles ever published, describes a morose Frank Sinatra silently nursing a glass of bourbon, struck down with a cold and unable to sing, like 'Picasso without paint, Ferrari without fuel - only worse'. The other writings in this selection include a description of a meeting between two legends, Fidel Castro and Muhammad Ali; a brilliantly witty dissection of the offices of Vogue magazine; an account of travelling to Ireland with hellraising actor Peter O'Toole; and a profile of fading baseball star Joe DiMaggio, which turns into a moving, immaculately-crafted meditation on celebrity.

Gay Talese (b. 1932) is an American author. He wrote for The New York Times in the early 1960s and helped to define literary journalism or 'new nonfiction reportage', also known as New Journalism. His most famous articles are about Joe DiMaggio, Dean Martin and Frank Sinatra. He lives in New York with his wife, Nan Talese.

If you enjoyed Frank Sinatra has a Cold, you might like George Orwell's Essays, also published in Penguin Modern Classics.

'The best non-fiction writer in America'
Mario Puzo, author of The Godfather

'A masterful New Journalism pioneer ... raises the magazine article to the level of an art form'
Los Angeles Times