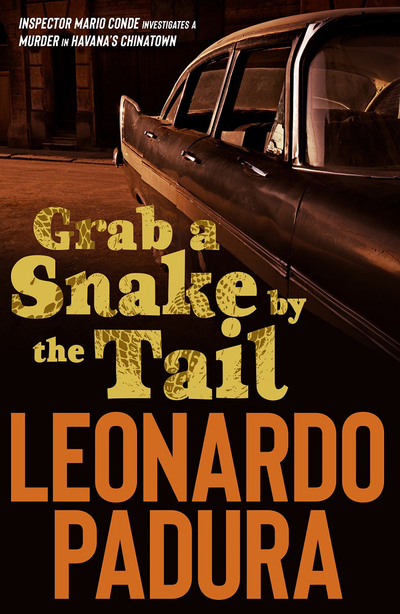 Grab a Snake by the Tail

Havana's Chinatown is not his usual beat, but when Conde is asked to take a murder case by the sultry, perfectly proportioned Police Lieutenant Patricia Chion, a frequent object of his nightly fantasies, he can't resist. Pedro Cuang is found hanging naked from a beam in the ceiling of his dingy room. One of his fingers has been cut off, and the outline of two arrows was carved with a knife on his chest. Was this a ritual Santeria killing or a just a sordid settling of accounts in a world of drug trafficking beginning to infiltrate Cuba in the 1980s? Soon Conde discovers unexpected connections, secret businesses and a history of misfortune, uprooting and loneliness that affected many immigrant families from China. The Barrio Chino was once one of the largest Chinatowns in the West. Now it feels like a ghetto of uprooted families, with its derelict cemetery and boarded-up shops. The story is soaked in atmosphere: African spells cast by babalao sorcerers, deliciously smoke-filled bars, deep friendships, and beautiful women. Especially the exotic Afro-Chinese Patricia Chion.