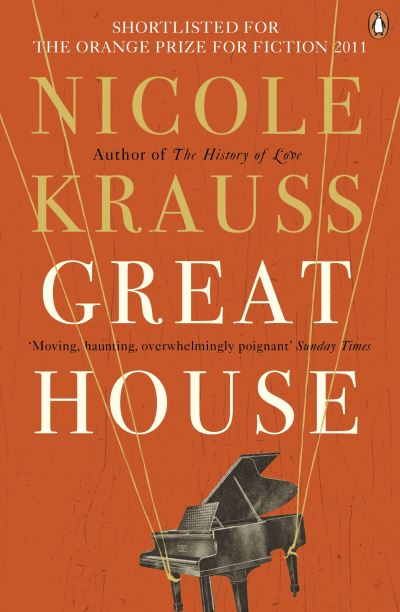 Shortlisted for the Orange Prize for Fiction 2011, Nicole Krauss's Great House is a haunting story that explores loss and memory.

In New York a woman spends the night with a young Chilean poet before he departs, leaving her at his desk. Later, he is arrested by Pinochet's secret police. . . In north London, a man caring for his dying wife discovers a lock of hair that unravels a terrible secret. . . In Jerusalem, an antiques dealer reassembles his father's study plundered by Nazis. One item remains missing. . .

Spanning continents and decades, weaving an intricate web of its characters' lives, Great House tells a soaring story of love, loss and survival against the odds.

'The History of Love was very good indeed. Great House...is even better. A heartbreaking meditation on loss and memory and how they construct our lives' Guardian

'Full of mystery and suspense, building towards one og th great climaxes in contemporary fiction. It is hard to imagine a better book of fiction being published this year...one of the finest writers of our time' Jewish Chronicle

Nicole Krauss is an American bestselling author who has received international critical acclaim for her first three novels: Great House, The History of Love (Shortlisted for the Orange Prize for Fiction 2006 and winner of the 2006 Prix du Meilleur Livre Etranger) and Man Walks into a Room (shortlisted for the LA Times Book Award), all of which are available in Penguin paperback.