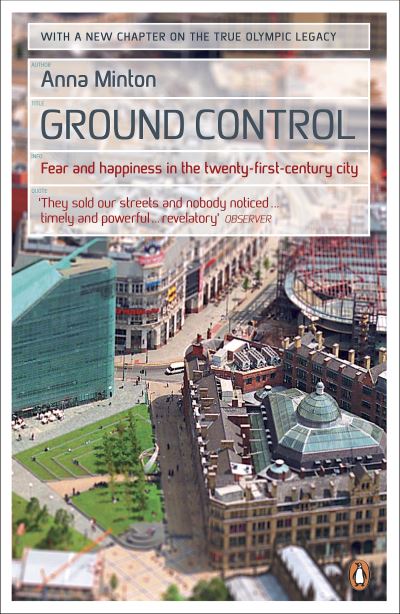 In Ground Control Anna Minton reveals the untested - and unwanted - urban planning that is changing not only our cities, but the nature of public space, of citizenship and of trust.

Britain's streets have been transformed by the construction of new property - but it's owned by private corporations, designed for profit and watched over by CCTV. Have these gleaming business districts, mega malls and gated developments led to 'regeneration', or have they intensified social divisions and made us more fearful of each other?

Now with a new chapter on the 2012 London Olympic legacy and Britain's housing collapse, Anna Minton's acclaimed and passionate polemic shows us the face of Britain today.

'They sold our streets and nobody noticed ... timely and powerful ... revelatory'
Observer

'A sustained, informed, articulate, timely work of rage ... Anna Minton has put her finger on one of the most profound and disturbing shifts in modern British cities'
Evening Standard

'A damning study of how Britain is curbing freedoms ... Minton is a brilliant journalist ... a vital book'
Daily Telegraph

'Eye-opening, unsettling ... A wonderful, timely analysis that reveals another, more sinister side to "gentrification" '
Financial Times

Anna Minton is the recipient of five national journalism awards. She was former staff writer for the Financial Times and writes regularly for the Guardian. Anna is the author of The Joseph Rowntree Foundation Viewpoint on fear and distrust and is a member of the writers' panel for The Commission for Architecture and the Built Environment.