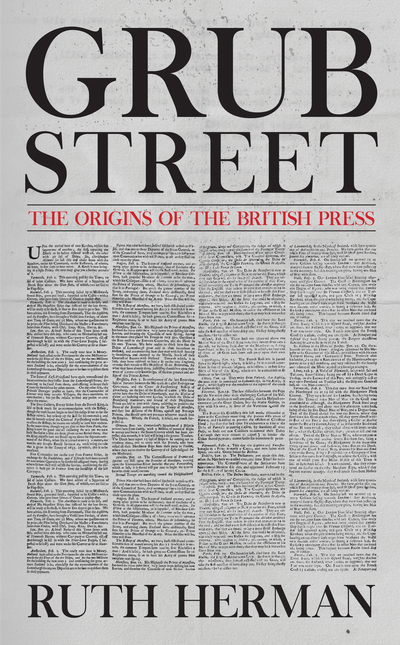 Grub Street: The Origins of the British Press

Love it or loathe it, the British press is a remarkable institution. Sometimes referred to as the fourth estate and accused of wielding power without responsibility, it has often been a channel for the dissemination of information that those at the top of the pyramid of power would rather stayed hidden. The press has also delighted in scraping the bottom of the barrel of public interest, deliberately manipulating facts and revelling in gossip and scandal. But where did this naughty child start? Ruth Herman takes the reader back to the early days of the British press. Grub Street follows the unsuccessful attempts of the government to strangle it at birth and looks at how an army of journalists found their feet and honed their craft. It considers the personalities who wrote fearlessly and the role played by some of English literature's most famous names. Printers and booksellers played a big part in the development of the press, and they are given their own share of the limelight. Along with stories of sedition and insider trading, Grub Street looks at the remarkable variety of content that appeared in these early periodicals, including the earliest examples of writing targeted at women and the often bizarre or downright astonishing advertising that shared the same pages. There have always been two sides to the press: one that serves the greater good with noble intent, and another preoccupied with profit, scandal, and circulation. This is not a modern phenomenon.