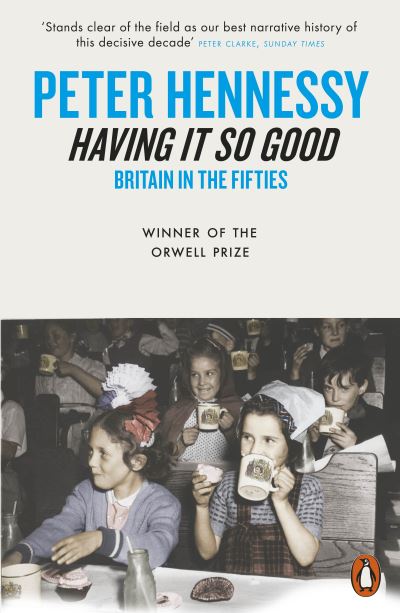 Having it So Good

Winner of the Orwell Prize

The second part of Peter Hennessy's celebrated Post-War Trilogy, Having it So Good: Britain in the Fifties captures Britain in an extraordinary decade, emerging from the shadow of war into growing affluence.

'If the Gods gossip, this is how it would sound' Philip Ziegler, Spectator Books of the Year

The 1950s was the decade in which Roger Bannister ran the four-minute mile, Bill Haley released 'Rock Around the Clock', rationing ended and Britain embarked on the traumatic, disastrous Suez War.

In this highly enjoyable, original book, Peter Hennessy takes his readers into front rooms, classrooms, cabinet rooms and the new high-street coffee bars of Britain to recapture, as no previous history has, the feel, the flavour and the politics of this extraordinary time of change.

'Stands clear of the field as our best narrative history of this decisive decade' Peter Clarke, Sunday Times

'A compelling narrative ... Hennessy's love of the flesh and blood of politics breathes on every page' Tim Gardam, Observer

'The late Ben Pimlott once described Hennessy as "something of a national institution". You can forget the first two of those five words' Guardian