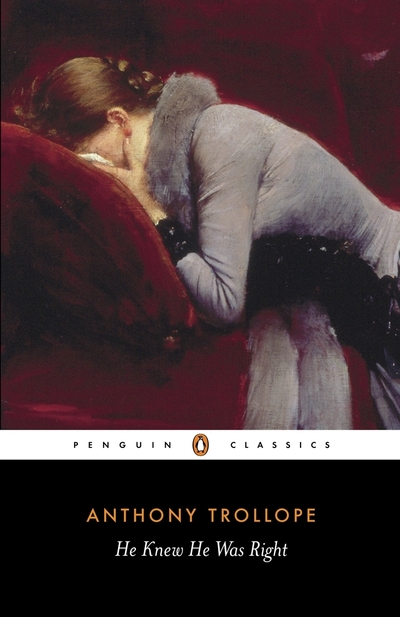 He Knew He Was Right

Anthony Trollope's story of one man's obsessive self-deception pitted against against the enduring power of his wife's love, He Knew He Was Right is edited with an introduction by Frank Kermode in Penguin Classics.

On a visit to the Mandarin Islands, Louis Trevelyan falls in love with Emily, the daughter of the governor, and they are swiftly married and return to live in London. But when a friend of Emily's father - the meddlesome libertine Colonel Osborne - starts paying rather too much attention to the young woman, Louis is consumed by jealousy and refuses to listen to his wife's pleas of innocence. And as his suspicions become increasingly obsessive and the marriage collapses, Louis finds himself driven to desperate actions. In He Knew He Was Right, Trollope created a highly sympathetic portrait of a deeply troubled marriage, and a compelling psychological story of sexual obsession in his portrait of a nineteenth-century Othello.

In his introduction, Frank Kermode discusses Victorian attitudes to courtship and marriage, compares the novel to Othello and places it in the context of Trollope's other works. This edition also includes a new chronology, a bibliography and notes.

Anthony Trollope (1815-82) had an unhappy childhood characterised by a stark contrast between his family's high social standing and their comparative poverty. He wrote his earliest novels while working as a Post Office inspector, but did not meet with success until the publication of the first of his 'Barsetshire novels', The Warden (1855). As well as writing over forty novels, including such popular works as Can You Forgive Her? (1865), Phineas Finn (1869), He Knew He Was Right (1869) and The Way We Live Now (1875) Trollope is credited with introducing the postbox to England.

If you enjoyed He Knew He Was Right, you might enjoy Trollope's The Way We Live Now, also available in Penguin Classics.