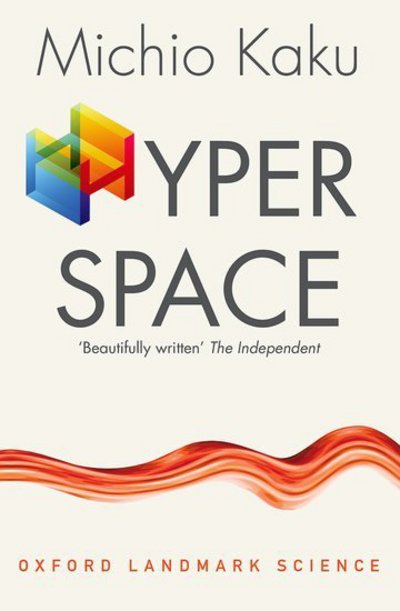 Already thoroughly familiar to the seasoned science fiction fan, hyperspace is that realm which enables a spaceship captain to take his ship on a physics-defying shortcut (or "wormhole") to the outer shores of the Galaxy in less time than it takes a 747 to fly from New York to Tokyo. But might such notions be more than science fiction? Some physicists suggest a 10-dimensional hyperspace may actually exist, albeit at a scale almost too small to comprehend, smaller even than a quark; and that in spite of its tiny size, it may be the basis on which all the forces of nature will be united. Michio Kaku's classic book describes the development of ideas about multidimensional space. In recent years, some theoretical physicists -the author among them - have argued that the Universe exists not merely in the four spacetime dimensions (3 of space + one of time) with which Einstein made us familiar, but rather as a ten-dimensional hyperspace. Once the domain of the science fiction writer or the occultist, hyperspace may, according to superstring theorists, be the way to unify the fundamental forces of nature - Einstein's unfulfilled dream of a theory of everything. Michio Kaku takes the reader on a ride through hyperspace to the edge of physics. On the way he gives crystal clear explanations of such formidable mathematical concepts as non-Euclidean geometry, Kaluza-Klein Theory, and Supergravity, the everyday tools of the string theorist. Utilizing fascinating and often hilarious anecdotes from history, art, and science fiction, Kaku shows us that writers and artists - in addition to scientists - have been fascinated by multidimensional space for over a century. Finally, Kaku proposes that the ability to master hyperspace may be our only salvation from destruction at the end of spacetime. Oxford Landmark Science books are 'must-read' classics of modern science writing which have crystallized big ideas, and shaped the way we think.