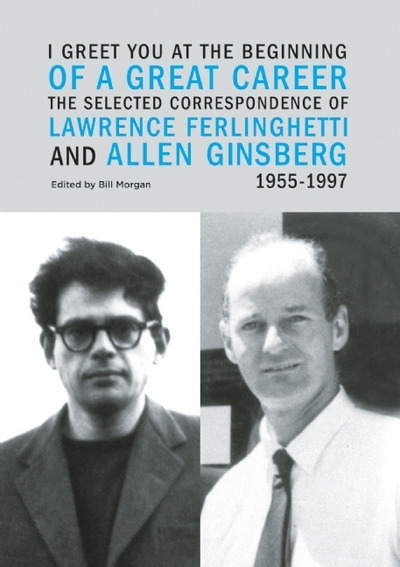 I Greet You at the Beginning of a Great Career

This book collects Ferlinghetti and Ginsberg's letters for the first time. Most have never been published before. Includes facsimiles of letters -- quantity TBA. Bill Morgan, editor, provides introductory notes, and footnotes, to contextualize/clarify letters for contemporary readers. The letters are collected between the years 1955 to 1997, which spans their entire friendship, from Ferlinghetti's publication of the revolutionary "HOWL and Other Poems" to Ginsberg's death. Majority of letters are from the earlier period, given that letter writing was most common then, of course, before people started using phone/fax/email. Provides a rich historic background into the process of acquiring and publishing HOWL. Offers an insider's view into Ferlingetti's role as publisher and Ginsberg's beginning writing career. The letters are quite illuminating, for example, showing the importance of Ferlinghetti as an editor of Ginsberg's work, a subject that has not been studied. Readers will be surprised to learn that Ginsberg had little confidence in his early writings. He often referred to his poems as "white elephants," and said that they wouldn't last 100 years. It was Ferlinghetti who realized Ginsberg's incredible talent and often encouraged him to get past his lack of self confidence.