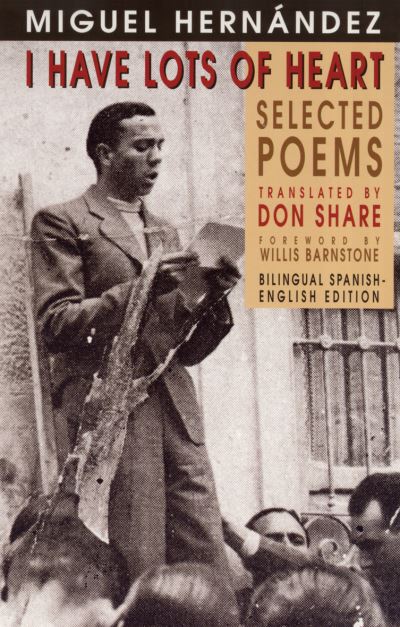 I Have Lots of Heart

Deeply admired by poets far more familiar to us, from Lorca to William Carlos Williams, the poems of Miguel Hernandez (1910-42), written in the midst of the savage 20th century, beam with a gentleness of heart. Hernandez was a self-educated goatherd from the tiny Spanish town of Orihuela who tried hard to be accepted among his older contemporaries. Lorca wrote to the young poet in 1933, telling him to stop struggling to get along in a 'circle of literary pigs'. After fighting on the Republican side in the Spanish Civil War, Hernandez was imprisoned in several of Franco's jails, where he continued to write until his death from untreated tuberculosis on 28 March 1942: he was only 31. Miguel Hernandez is now one of the most revered poets in the Spanish-speaking world. From his early formalism, paying homage to Gongora and Quevedo, to the final poems, which are passionate and bittersweet, Hernandez' work is a dazzling reminder that force can never defeat spirit, and that courage is its own reward. Pablo Neruda called him 'a great master of language - a wonderful poet'.