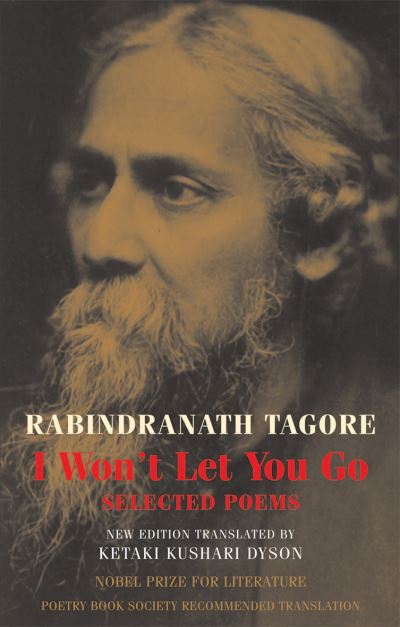 I Won't Let You Go

Poetry Book Society Recommended Translation. Rabindranath Tagore (1861-1941) is India's greatest modern poet and the most brilliant creative genius produced by the Indian Renaissance. As well as poetry, he wrote songs, stories and novels, plays, essays, memoirs and travelogues. He was both a restless innovator and a superb craftsman, and the Bengali language attained great beauty and power in his hands. He created his own genre of dance drama and is one of the most important visual artists of modern India. He won the Nobel Prize for Literature in 1913. Tagore's poetry has an impressive wholeness: a magnificent loving warmth, a compassionate humanity, a delicate sensuousness, an intense sense of kinship with nature and a burning awareness of man's place in the universe. He moves with effortless ease from the literal to the symbolic, from the part of the whole, from a tiny detail to the vast cosmos. He is religious in the deepest sense, wavering between a faith that sustains the spirit in times of crisis - or fills it with energy and joy in times of happiness - and a profound questioning that can find no enduring answers. To him the earth is a vulnerable mother who clings to all her offspring, saying 'I won't let you go' to the tiniest blade of grass that springs from her womb, but who is powerless to prevent the decay and death of her children. This is the revised and enlarged second edition of a substantial selection of Tagore's poems and songs translated with an illustrated introduction, notes and glossary by the bilingual writer Ketaki Kushari Dyson, who lives in Oxford. Poet, novelist, playwright, translator, linguist and critic, she is one of the outstanding Bengali writers of her generation, and has published more than thirty titles in her two languages, including acclaimed scholarly works on Tagore.