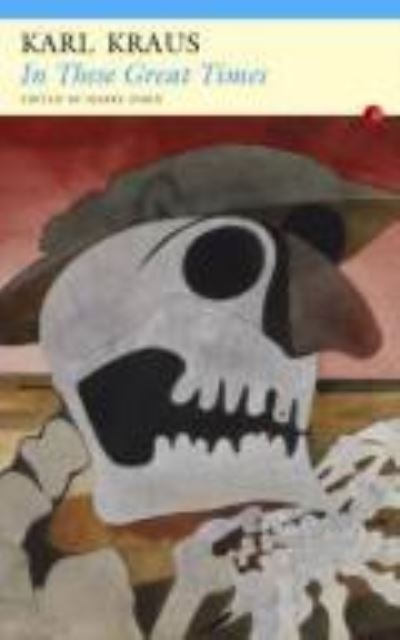 In These Great Times

In these great times which I knew when they were this small; which will become small again, provided they have time left for it; [...] in these serious times which have died laughing at the thought that they might become serious;[...] in these loud times, which boom with the horrible symphony of actions which produce reports and of reports which cause actions; in these times you should not expect any words of my own from me - none but these words which barely manage to prevent silence from being misinterpreted.The Viennese satirist Karl Kraus (1874-1936) is a unique figure in modern European literature: moralist, pacifist, aphorist, editor, he was a Cassandra to whom everyone listened, whom few heeded. In the 120 years since his death, Kraus's warnings have not lost their urgency. The objects of his derision - journalists, war-peddlers, cultural tourists, sentimentalists and capitulators - are exposed to the brilliant light of his irony. Kraus's satire can be transposed into our world with alarming ease.This selection from the full range of Kraus's work includes prose pieces from his satirical newspaper Die Fackel (The Torch), poems, aphorisms, and a vivid condensation of The Last Days of Mankind, his epic anti-war drama, generally considered his masterpiece. 'Let my style capture all the sounds of my time,' wrote Kraus, urging future generations 'to hold it to their ears like a seashell in which there is the music of an ocean of mud."When the age died by its own hand, he was that hand.'- Bertolt Brecht