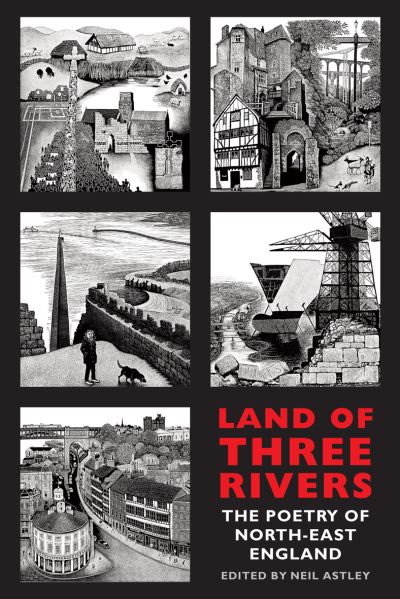 Land of Three Rivers is a celebration of North-East England in poetry, featuring its places and people, culture, history, language and stories in poems and songs with both rural and urban settings. Taking its bearings from the Tyne, Wear and Tees of the title (from Vin Garbutt's song 'John North'), the book maps the region in poems relating to past and present, depicting life from Roman times through medieval Northumbria and the industrial era of mining and shipbuilding up to the present-day. The anthology has modern perspectives on historical subjects, such as W.H. Auden's 'Roman Wall Blues' and Alistair Elliot on the aftermath of the Battle of Heavenfield in the 7th century, as well as poets from past ages, starting with Caedmon, the first English poet, writing in the 8th century. There are classic North-East songs from the oral tradition of balladeers and pitmen poets alongside the work of literary chroniclers like Mark Akenside from the 18th century, followed by evocations of Northumberland by decadent gentry poet Algernon Charles Swinburne contrasting with grim tales of life down the pit by Tommy Armstrong, Joseph Skipsey and Thomas Wilson in the 19th century. The region's favourite tipple is championed by 18th-century poet John Cunningham in his eulogy 'Newcastle Beer', while 200 years later, Tony Harrison's defences are 'broken down / on nine or ten Newcastle Brown' in his 'Newcastle Is Peru' (1969). Durham is celebrated in a 12th-century priest's poem but is a trinity of 'University, Cathedral, Gaol' for Tony Harrison. The River Tyne flows through poems by Wilfrid Gibson, James Kirkup, Michael Roberts, Francis Scarfe from early to mid-20th century, while the region's dialects (from Northumbrian to Geordie and Pitmatic) are heard in poems by Basil Bunting, William Martin, Tom Pickard, Katrina Porteous and Fred Reed. Other modern and contemporary poets and songwriters featured include Gillian Allnutt, Peter Armstrong, Peter Bennet, Robyn Bolam, George Charlton, Julia Darling, Richard Dawson, the Elliotts of Birtley, W.N. Herbert, Alan Hull, James Kirkup, Mark Knopfler, Barry MacSweeney, Sean O'Brien, Rodney Pybus, Kathleen Raine, Jon Silkin and Anne Stevenson, as well as poets who've spent time in the North-East, such as Fleur Adcock, David Constantine, Fred D'Aguiar, Frances Horovitz, Philip Larkin, Michael Longley and Carol Rumens, writing highly memorable poems in response to the place, its people and their stories. The book's introduction is in two parts, with Rodney Pybus covering the historical background and Neil Astley the last 50 years. This emphasises the importance of the oral tradition during the centuries when little "written poetry" of note was produced in the region. There are also fascinating commentaries on key historical figures by the late Alan Myers.