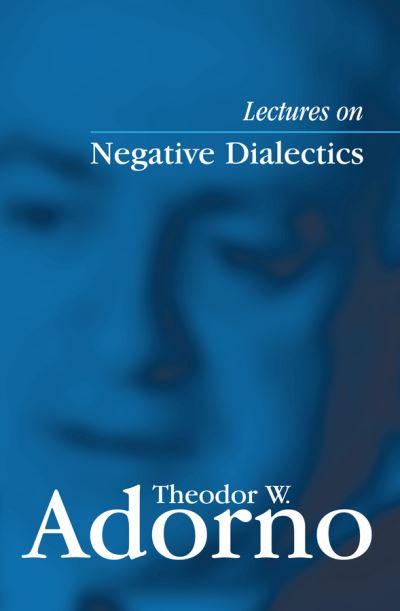 This volume comprises one of the key lecture courses leading up to the publication in 1966 of Adorno's major work, Negative Dialectics . These lectures focus on developing the concepts critical to the introductory section of that book. They show Adorno as an embattled philosopher defining his own methodology among the prevailing trends of the time. As a critical theorist, he repudiated the worn-out Marxist stereotypes still dominant in the Soviet bloc - he specifically addresses his remarks to students who had escaped from the East in the period leading up to the building of the Berlin Wall in 1961. Influenced as he was by the empirical schools of thought he had encountered in the United States, he nevertheless continued to resist what he saw as their surrender to scientific and mathematical abstraction. However, their influence was potent enough to prevent him from reverting to the traditional idealisms still prevalent in Germany, or to their latest manifestations in the shape of the new ontology of Heidegger and his disciples. Instead, he attempts to define, perhaps more simply and fully than in the final published version, a 'negative', i.e. critical, approach to philosophy. Permeating the whole book is Adorno's sense of the overwhelming power of totalizing, dominating systems in the post-Auschwitz world. Intellectual negativity, therefore, commits him to the stubborn defence of individuals - both facts and people - who stubbornly refuse to become integrated into 'the administered world'. These lectures reveal Adorno to be a lively and engaging lecturer. He makes serious demands on his listeners but always manages to enliven his arguments with observations on philosophers and writers such as Proust and Brecht and comments on current events. Heavy intellectual artillery is combined with a concern for his students' progress.