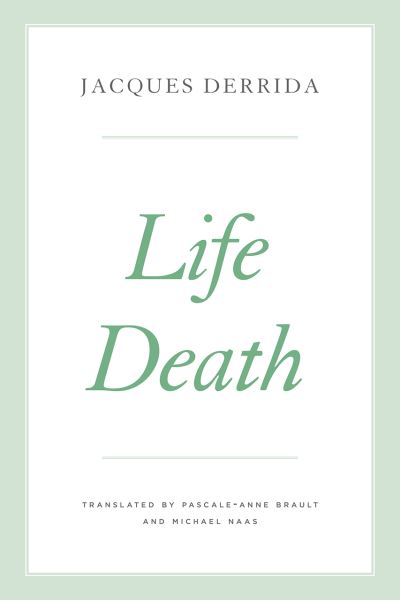 One of Jacques Derrida's richest and most provocative works, Life Death challenges and deconstructs one of the most deeply rooted dichotomies of Western thought: life and death. Here Derrida rethinks the traditional philosophical understanding of the relationship between life and death, undertaking multidisciplinary analyses of a range of topics, including philosophy, linguistics, and the life sciences. In seeking to understand the relationship between life and death, he engages in close readings of Freudian psychoanalysis, the philosophy of Nietzsche and Heidegger, French geneticist Francois Jacob, and epistemologist Georges Canguilhem. Derrida gave his "Life Death" seminar over fourteen sessions between 1975 and 1976 at the Ecole normale superieure in Paris as part of the preparation for students studying for the agregation, a notoriously competitive qualifying exam. The theme for the exam that year was "Life and Death," but Derrida made a critical modification to the title by dropping the coordinating conjunction. The resulting title of Life Death poses a philosophical question about the close relationship between life and death. Derrida argues that death must be considered neither as the opposite of life nor as the truth or fulfillment of it, but rather as that which both limits life and makes it possible. Through these captivating sessions, Derrida thus not only questions traditional understandings of the relationship between life and death, but also ultimately develops a new way of thinking about what he calls "life death."