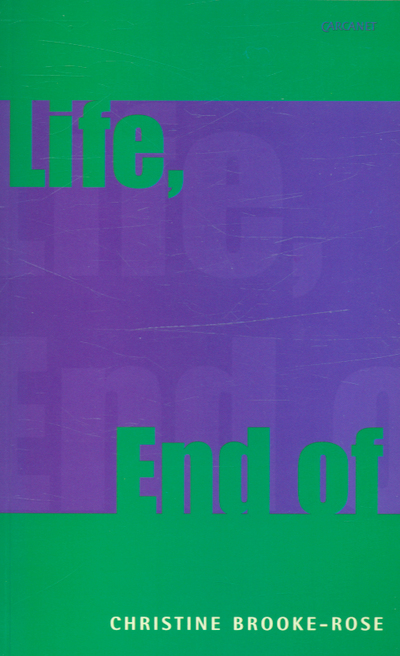 She is eighty. Facing death, she becomes 'a cruising mind', lost in sequences of unabstract comic detail, in - as the title implies - a kind of index, rigid, arbitrary, pointing backwards into the lived text. The head top leans against the bathroom mirror so that the looking glass becomes a feeling glass. She is getting worse day by day, and yet she goes on, deeper into meaning, into non-meaning, with a kind of wry eagerness. She is not disappointed with her life. In order to distract herself, to place herself, she attends to what the media say about the world as if what they say was actually the world. She reflects on her own career, on her experiments with narrative, and on the narrative she is writing here: therapy, fun, but anything else, anything more? What is its purpose, and what the purpose of the life that lives it in the writing? She discovers how, as in fiction, as in any form of experiment, the difficulty for the handicapped is less the handicap than other people, and they too have their lives and handicaps. She becomes like them, she becomes one of them, an other person.Reasserting herself, at the centre of the book, in a mock-technical lecture from a character to an author who is not interested, she comes to accept that her experiments in narrative are like pain-killers, and that they no longer matter, like life.