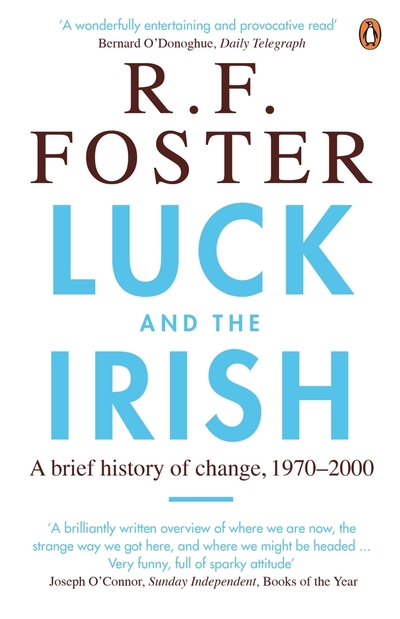 Luck and the Irish

R.F. Foster's Luck and the Irish: A Brief History of Change, 1970-2000 examines how the country has weathered thirty years of rapid transformation, and what these changes may mean in the long run.

From 1970, things were changing in Ireland - the Celtic Tiger had finally woken, and the rules for everything from gender roles and religion to international relations were being entirely rewritten. By the end of the twentieth century, Ireland had become a global brand, and the almost completely unexpected wave of prosperity had brought with it upheavals in economics, sexual mores and culture, as well as a shift in North-South attitudes.

Roy Foster also looks at how characters as diverse as Gerry Adams, Mary Robinson, Charles Haughey and Bob Geldof have contributed to Ireland's altered psyche, and uncovers some of the scandals, corruption and marketing masterminds that have transformed Ireland - and its luck.

'Examines our society with fierce intelligence and insight'
Colm Toibin, Irish Times Books of the Year

'Occasionally angry, sometimes whimsical and frequently hilarious ... Appeals both to those who know nothing and those who think they know everything'
Conor Gearty, Financial Times

'The brilliance of the writing places him as a historian in a league of his own ... A balanced work offering his own distinctive, original and elegant insights'
Diarmaid Ferriter, Times Literary Supplement

R. F. Foster is Carroll Professor of Irish History at the University of Oxford and a Fellow of Hertford College, Oxford. His books include Modern Ireland: 1600-1972, The Irish Story and W. B. Yeats: A Life.